La Vanguardia (The Vanguard), one of the top publications in Spain, just published the “Founder of the Unicorn Startup Calls for Universal Access to the ‘Great Equalizer’” interview with Silvina Moschini, a co-founder, Chairwoman and President of TransparentBusiness - 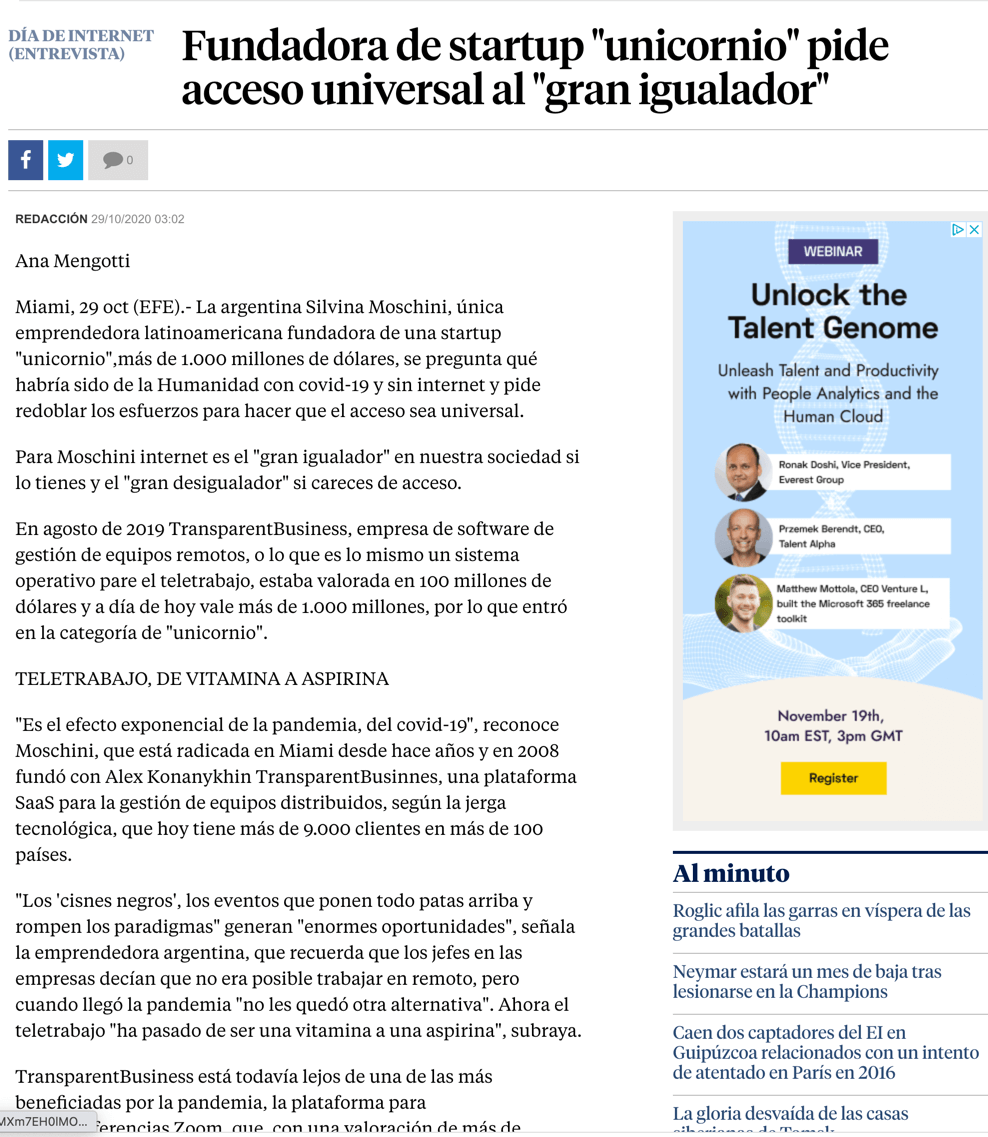 Miami, Oct 29 (EFE) - Argentine Silvina Moschini, the only Latin American entrepreneur who founded a "unicorn" startup, worth more than a billion dollars, wonders what would have happened to humanity with Covid-19 and without internet and asks to redouble efforts to make access universal.

In August 2019 TransparentBusiness, a remote equipment management software company, or what is the same as an operating system for teleworking, was valued at 100 million dollars and today it is worth more than a billion, so it entered the category of "unicorn".

TELEWORKING, FROM VITAMIN TO ASPIRIN

"It is the exponential effect of the pandemic, of the Covid-19", recognizes Moschini, who has been based in Miami for years and in 2008 founded with Alex Konanykhin TransparentBusinnes, a SaaS platform for the management of distributed teams, according to technological jargon, which today has more than 9,000 clients in more than 100 countries.

"The 'black swans', the events that turn everything upside down and break the paradigms" generate "enormous opportunities", points out the Argentine entrepreneur, who recalls that the bosses in the companies said that it was not possible to work remotely, but when it arrived the pandemic "had no other alternative." Now teleworking "has gone from being a vitamin to an aspirin," he stresses.

TransparentBusiness is still far from one of the biggest beneficiaries of the pandemic, the Zoom video conferencing platform, which, with a valuation of more than $140 billion, has a valuation that surpasses "all airlines combined," says Moschini.

But by the end of 2021 TransparentBusiness intends to launch a takeover bid in the New York stock market for $10 billion, preceded by a series of financing rounds.

Moschini says they could have offered a higher figure, but they do not want buyers to immediately sell the acquired shares and the stock market to fall as it happened to giant IPOs such as Uber or Facebook. Today TransparentBusiness shares are sold for one dollar each.

TransparentBusiness knew that the telecommuting boom was going to come but not that it was going to do it "all at once" due to the pandemic. "What could happen in five years happened in a few months," says Moschini, who notes that they were "relatively" well prepared, especially from a technological point of view.

This entrepreneur, who would like there to be more women among those who invest in companies like hers, points out that they will have to hire many people, the team today is about 60, and they also propose to acquire companies with complementary solutions of those of TransparentBusiness.

By 2022, TransparentBusiness software will be available globally and free of charge to small and medium-sized businesses (SMBs), which are the most affected by the pandemic. Each SMB can apply for up to 25 licenses at no cost and will also receive training. Teleworking is something that is here to stay. "The genie came out of the lamp," he says very graphically.

On this Internet Day, the entrepreneur remembers that none of this would be possible without the network of networks.

In the last twelve months, the total number of people connected rose to 346 million, which is equivalent to a growth of 8% year-on-year, and more than 8 out of 10 mobile users declare that the internet was essential to survive the pandemic.

In her article Moschini recalls that remote work was consolidated as one of the supports of the new normal and today it has its own slogan: "Work is where there is wifi."

"The pandemic made it clear that Internet connection should be a universal right. Although everything else is uncertain, the Internet earned a place on the podium of the great inventions of history, such as electricity or the telephone, and it should be accessible to all ", she emphasizes. EFE