We are pleased to share with you that today La Prensa (The Press), a major publication in Argentina, published a long interview with Silvina Moschini, a co-founder, Chairwoman and President of TransparentBusiness -

(the translation is below) 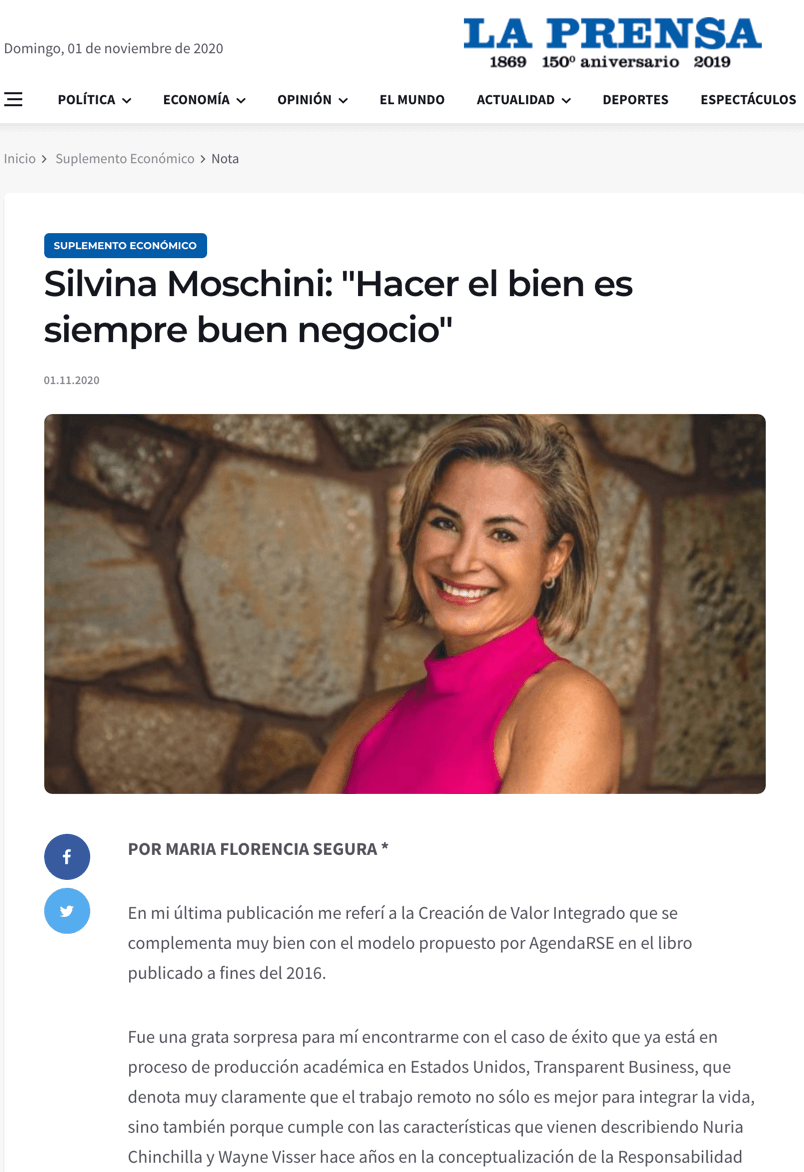 In my last publication, I referred to the Creation of Integrated Value that complements very well the model proposed by AgendaRSE in the book published at the end of 2016.

It was a pleasant surprise for me to find the success story that is already in the process of academic production in the United States, Transparent Business, which clearly indicates that remote work is not only better to integrate life, but also because it complies with the characteristics that Nuria Chinchilla and Wayne Visser have been describing for years in the conceptualization of Corporate Social Responsibility. In the case of Nuria with the triangle of sustainability and in the case of Wayne Visser with what he calls CSR 2.0 and which breaks down into the following characteristics: Creativity, scalability (ability to scale); responsibility (responsiveness); glocality (global actions with local impact); and circularity (that does not pollute the environment).

Entre Cisnes Negros y Unicornios is a publication that appeared in the Forbes Central America Magazine in May of this year, which highlighted the importance of taking challenges as opportunities to invest in the great winners of the new normal, such as the collaboration platform and TransparentBusiness remote work that has made Silvina Moschini the first Latin American woman to own a unicorn in the United States earlier this month.

WHAT IS A UNICORN?

By definition, a unicorn is a fabulous and mythological animal. But in business this term has a somewhat different connotation. In November 2013, Aileen Lee, founder of Cowboy Ventures, was the first to introduce the term referring to a technology company that reaches a value of one billion dollars in some stage of its capital raising process. According to Aileen, these unicorns used to be a myth or a fantasy. But now it looks like we find at least four such companies a year, backed by a new generation of disruptive technology. The incredible thing is that until now, no woman has appeared at the top of this new ranking of companies, which marks a milestone in the history of female startup leadership.

And it is that the pandemic has not only accelerated what Schumpeter, a prominent Austro-American economist and former professor at Harvard University, called creative destruction, but has also rewarded startups that "turned around to see how the wave was coming" and now they were ready to face this change by innovation in their products, processes and services.

"The reason we became a Latin American unicorn was because we were ready when the storm came," said Silvina Moschini.

According to the entrepreneur, it was proven that teams can be just as (or even more) productive operating remotely, to the point that 8 out of 10 CFOs plan to keep at least 5% of their productive force in remote work, as revealed by a survey from Gartner.

"The technological platforms that allow working with distributed teams, and that until not long ago were considered a luxury for a few, today guarantee the continuity of business during confinement but also in the future."

Covid-19 imposed the paradigm shift that I have been proclaiming for years discovering the economic viability of businesses that apply true Corporate Social Responsibility.

"The pandemic accelerated remote work and will allow Argentina to export services to the world from home and we are happy with the opportunity to promote it because talent is premium. We understand that today women achieve the highest number of university degrees, masters and doctorates And yet when they are moms, half plus one of them quit their job due to lack of flexibility. That's why we focused on attracting them to our team and launched She Works !, so that others can also benefit from the talent of half the universe. We dared to think differently by allowing companies to work remotely, with technology, education and remote talent because we understood that work is something that is done and not a place where you go, "he said.

Statistics estimate that only 2% of the venture capital invested goes to women and only 0.4% of the funds in venture capital are destined to startups led by Latin American women in the United States.

"Seeing that someone achieved it serves to show that it is possible," highlights Silvia, who also invests time in acceleration and support programs for women, including being part of the Steering Committee of Google Accelerator for Women, Vital Voices and also investing in some startups personally and will continue to do so.

"We will create an investment fund for Workforce Management platforms in 2021 as well. Of course, for me startups led by women are considered with special interest. Even when we were very young and did not have too many resources, we allied with The White House by donating our technology to support refugees to get remote work.

We created SheWorksAcademy!, so that women like the ones we trained in Guatemala in digital skills, today can enjoy their family and do what they like the most from their city to the world without having to leave their home.

We donate our time and resources so that SMEs can cope with the pandemic by creating the Cloud Working Academy so that they learn to successfully manage their remote teams and we will redouble our commitment and our commitment by announcing that we will make our software available to them for free until 2022".

They plan to grant 25 licenses for SMEs, but anyone who wants to set up a virtual company can also access it. They do not care if you are self-employed or have a formally incorporated company. "We are looking to help people start businesses in the cloud," he said.

Regarding what she considers important for an entrepreneurial woman to be able to build the necessary resilience, she mentions: "It is important that you understand that Rome is not built in a day and that many people will reject it. My advice is to take that motivation that rejection gives or someone not believing in you, as the energy, motivation and inspiration to succeed (and prove them wrong.) Let’s make fashionable the phrase: Don't believe in me; just watch me."

Regarding which have been the key success factors to be able to build a solid team and make a scalable business, she commented: "As key success factors: our vision of Impact. And that money was never the central reason for what we do. . We always seek to do something to leave the world better - hack unemployment, help women and improve people's quality of life. Doing good is always good business. Diversity is the key to success. You have to work with men and with people who are brilliant in areas where you are not."

I asked her how she has been able to overcome the backlash that is experienced as a woman in the technology market and what her most important pillars have been and she replied: "Think and do things differently. Transparency, Resilience, Innovation and Commitment to raising other women. We launched ourselves into the world through the digitization of the fundraising process by announcing the first Global Private Offering (RegD 506c) that allowed investors from all over the world to co-invest with accredited investors in the United States and the market responded and embraced us, allowing us to Today our dream of becoming the world's first pink unicorn built with the support of the people and led by a woman, is a reality and the beginning of a new era of opportunity. "

"Since 2012 we have been working tirelessly on this project. With heart and soul focused on building an inclusive, transparent, efficient world of work with opportunities for all."

"Because beyond the improvements in productivity, we fell in love with technology because it allows the barriers that separate talent from opportunities to be eliminated, because it allows women to reconcile personal life and professional life, because it makes it possible to hack unemployment through international labor intermediation, in countries with a lot of talent and few local possibilities ".

Regarding women over 50 who are not in a dependency relationship and if they have time to have successful digital ventures while living in Argentina and what would I advise them to take the first steps, she told me: "Women over 50 if they can be more successful. Talent has no gender or age. I'm almost 50! It's never too late to reinvent your life. Key to success? Success is a path not a destination. For me, the driver is that I never gave up or never gave up and I really value my opinion of myself. I trust myself as all women should trust themselves. "

She is definitely what, in the words of Nuria Chinchilla, would be called a synergistic or post-feminist leader and she is the model that we support from AgendaRSE.