We are pleased to share a new article by Silvina Moschini, a co-founder, Chairwoman and President of TransparentBusiness, 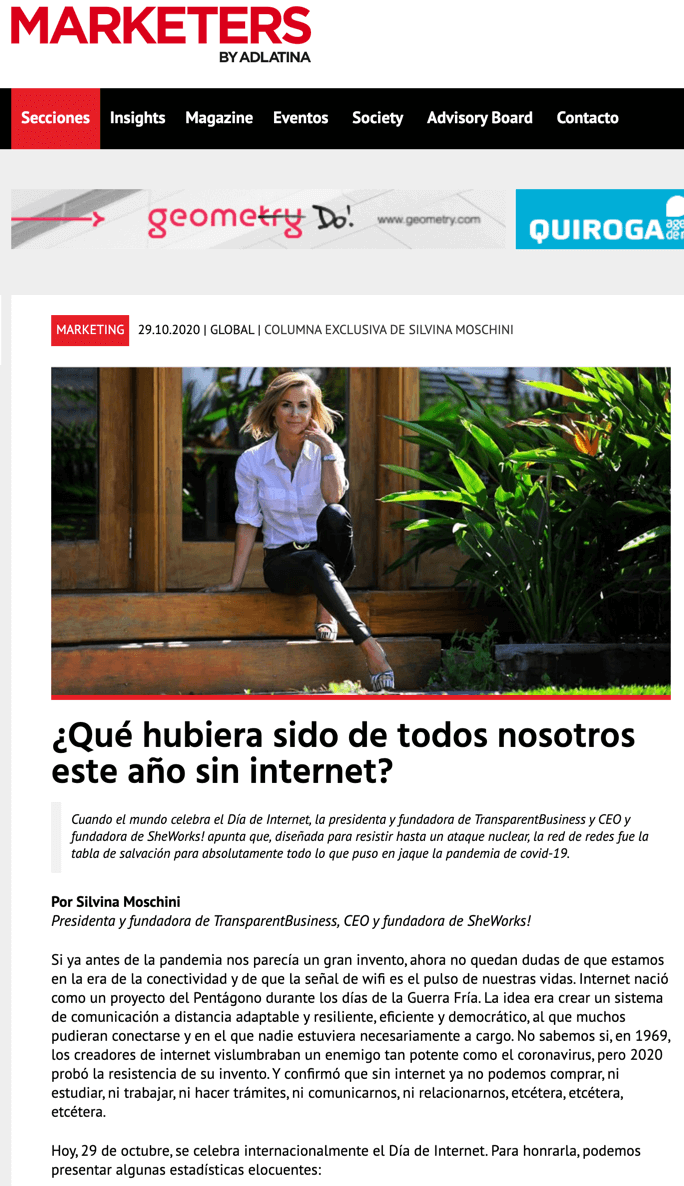 What would have happened to all of us this year without the internet?

As the world celebrates Internet Day, the president and founder of TransparentBusiness and CEO and founder of SheWorks! points out that, designed to resist even a nuclear attack, the network of networks was the lifeline for absolutely everything that the covid-19 pandemic put in check.

If before the pandemic it seemed like a great invention to us, now there is no doubt that we are in the era of connectivity and that the Wi-Fi signal is the pulse of our lives. The Internet was born as a Pentagon project during the Cold War days. The idea was to create an adaptable and resilient, efficient and democratic remote communication system, to which many could connect and in which no one was necessarily in charge. We do not know if, in 1969, the creators of the internet envisioned an enemy as powerful as the coronavirus, but 2020 proved the resistance of their invention. And she confirmed that without internet we can no longer buy, study, work, do paperwork, communicate, or interact, etcetera, etcetera, etcetera.

Today, October 29, Internet Day is celebrated internationally. To honor her, we can present some eloquent statistics:

4,570 million people use the internet worldwide, which is equivalent to 60% of the world's population.

In the last twelve months, the total number of connected people climbed 346 million, which is equivalent to a growth of 8% year-on-year (approximately eleven new internet users per second since July 2019).

More than eight out of ten mobile users declare that the internet was essential to survive the pandemic, because it allowed them to sustain their children's education (76%), keep in touch with friends and family (74%) and even improve their well-being ( 43%).

Between the revolutions of this year, remote work consolidated itself as one of the pillars of the new normal. From the smallest to the largest companies they had to adapt their models to distributed teams, and many of them are going to stay that way even after the health crisis. The conversion was so massive that it even coined its own slogan: "Work is where the wifi is" is the new "Home is where the heart is" (My home is where my heart is).

Remote work reduces production costs, allows remote access to talent, maintains productivity levels with flexible hours, enhances concentration, eliminates the work-family axis, reduces travel and, practically, allows information to be stored in the cloud so that all members of a team are aligned and can monitor the execution of processes with transparency and efficiency.

However, it is not enough to have a connection to jump into the new era. A survey by the International Labor Organization says that 50% of the world's small businesses currently need advice to gain a competitive position and that much of the reactivation depends on their adaptation to remote operations. Among other projects that have emerged to prop up the new economy, TransparentBusiness launches a global program to support SMEs until 2022: an initiative that makes a benefits package available to all companies and organizations in the region that includes free licenses of its platform for up to 25 users and access to a training program for remote work management.

The pandemic made it clear that internet connection should be a universal right. Although everything else is uncertain, the Internet has earned a place on the podium of the great inventions of history, such as electricity or the telephone, and should be accessible to everyone.