Today, on the day of the official launch of our 3d round of financing, infobae, a leading Spanish-language business publication published the following interview with Silvina Moschini, a co-founder, Chairwoman and President of TransparentBusiness:

An Argentinian is the owner of the first pink unicorn: what her USD 1 billion company does and why it “exploded” in the pandemic.
Silvina Moschini is co-founder and president of TransparentBusiness. Private investments in this platform that manages remote work allowed it to achieve that valuation. They plan to go public next year.

[see the rest of translation below] 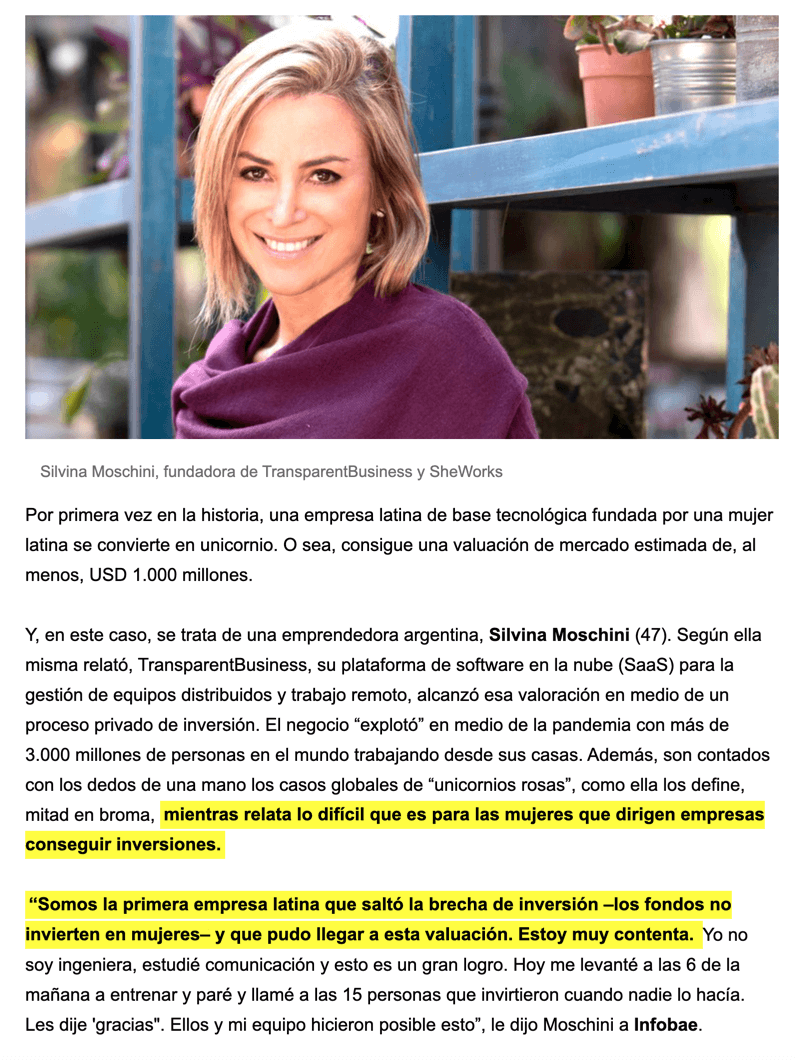 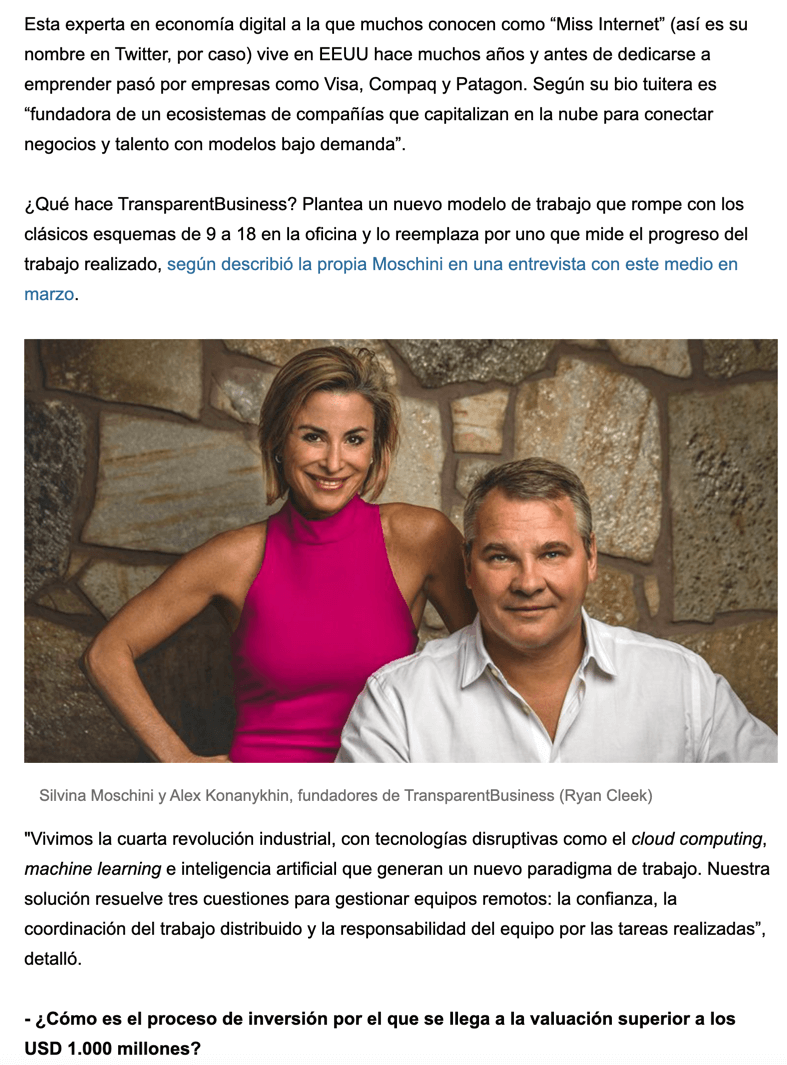 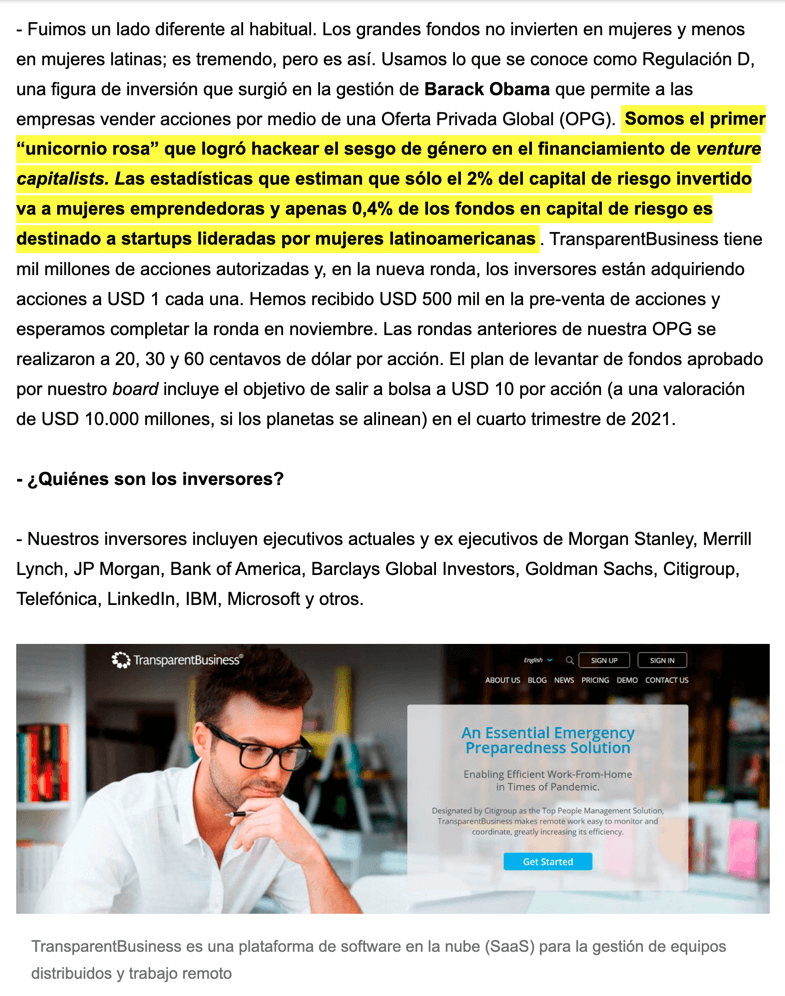 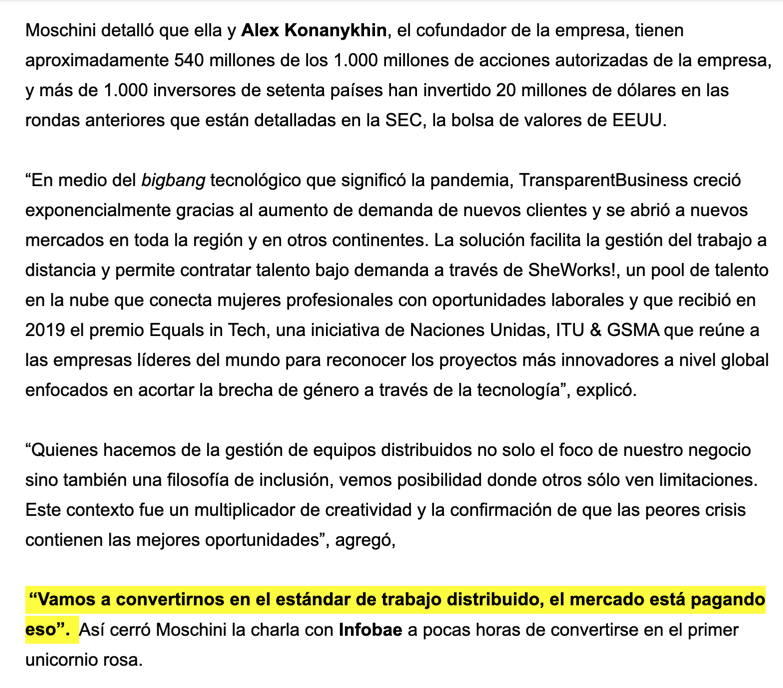 For the first time in history, an IT company founded by a Latina woman has become a unicorn. In other words, it got an estimated market valuation of at least $1 billion.

And, in this case, it is an Argentine entrepreneur, Silvina Moschini (47). According to her, TransparentBusiness, her software platform in the Cloud (SaaS) for the management of distributed teams and remote work, reached that valuation in the middle of a private investment process. The business "exploded" in the midst of the pandemic with more than 3,000 million people in the world working from home. In addition, the global cases of "pink unicorns", as she defines them half-jokingly, are counted on the fingers of one hand, while she recounts how difficult it is for women who run companies to get investments.

“We are the first Latin company that jumped the investment gap - the funds do not invest in women - and that was able to reach this valuation. I'm very happy. I am not an engineer, I studied communication and this is a great achievement. Today I got up at 6 in the morning to train and stopped and called the 15 people who invested when no one did. I told them 'thank you'. They and my team made this possible,” Moschini told Infobae.

This expert in digital economy whom many know as "Miss Internet" (that's her name on Twitter, for example) has lived in the US for many years and before dedicating herself to entrepreneurship, she had passed through companies such as Visa, Compaq and Patagon. According to her tweet bio, she is "the founder of an ecosystem of companies that capitalize on the Cloud to connect businesses and talent with on-demand models."

What does TransparentBusiness do?
It offers a new work model that breaks with the classic 9-to-6 office routine and replaces it with one that measures the progress of the work done, as Moschini herself described in an interview with this medium in March.
"We are experiencing the fourth industrial revolution, with disruptive technologies such as cloud computing, machine learning and artificial intelligence that generate a new work paradigm. Our solution solves three issues to manage remote teams: trust, distributed work coordination and responsibility for team for the tasks performed”, she detailed.

What is the investment process that led to a valuation of more than USD 1,000 million?
We selected an unusual route. Large funds do not invest in women, much less in Latina women; it's horrible, but it is so. We use what is known as Regulation D, an investment rule that emerged in the administration of Barack Obama that allows companies to sell shares through a Global Private Offering (GPO). We are the first “pink unicorn” to hack into the gender bias in venture capitalist financing. The statistics estimate that only 2% of the venture capital invested goes to women entrepreneurs and only 0.4% of the funds in venture capital is destined to startups led by Latin American women. TransparentBusiness has 1 billion authorized shares, and in the new round, investors are acquiring shares at $1 each. We have received US$500 thousand in the pre-sale of shares and we expect to complete this round in November. Previous rounds of our GPO were conducted at 20, 30 and 60 cents per share. The fundraising plan approved by our Board includes a target of going public at $10 per share (at a valuation of $ 10 billion, if the stars align) in the fourth quarter of 2021.

Who are the investors?
Our investors include current and former executives from Morgan Stanley, Merrill Lynch, JP Morgan, Bank of America, Barclays Global Investors, Goldman Sachs, Citigroup, Telefónica, LinkedIn, IBM, Microsoft and others.
Moschini explained that she and Alex Konanykhin, the co-founder of the company, have approximately 540 million of the 1 billion authorized shares of the company, and more than 1,000 investors from seventy countries have invested 20 million dollars in the previous rounds that are detailed in the SEC, the US stock exchange.

“In the midst of the technological Big Bang caused by the pandemic, TransparentBusiness grew exponentially thanks to the increase in demand from new customers and opened up to new markets throughout the region and on other continents. The solution facilitates the management of remote work and allows hiring talent on demand through SheWorks!, a talent pool in the cloud that connects professional women with job opportunities and that received in 2019 the Equals in Tech award, an initiative of Nations United, ITU & GSMA that brings together the world's leading companies to recognize the most innovative projects at a global level focused on reducing the gender gap through technology”, she explained.

“Those of us who make the management of distributed teams not only the focus of our business but also a philosophy of inclusion, we see possibility where others only see challenges. This context was a multiplier of creativity and the confirmation that the worst crises contain the best opportunities”, she added,

"We are going to become the standard of distributed work, the market is financing it." This is how Moschini closed the talk with Infobae a few hours after becoming the first pink unicorn.