Leading financial and news media published or broadcasted advertising on the investment opportunity offered by TransparentBusiness. Here are some samples: 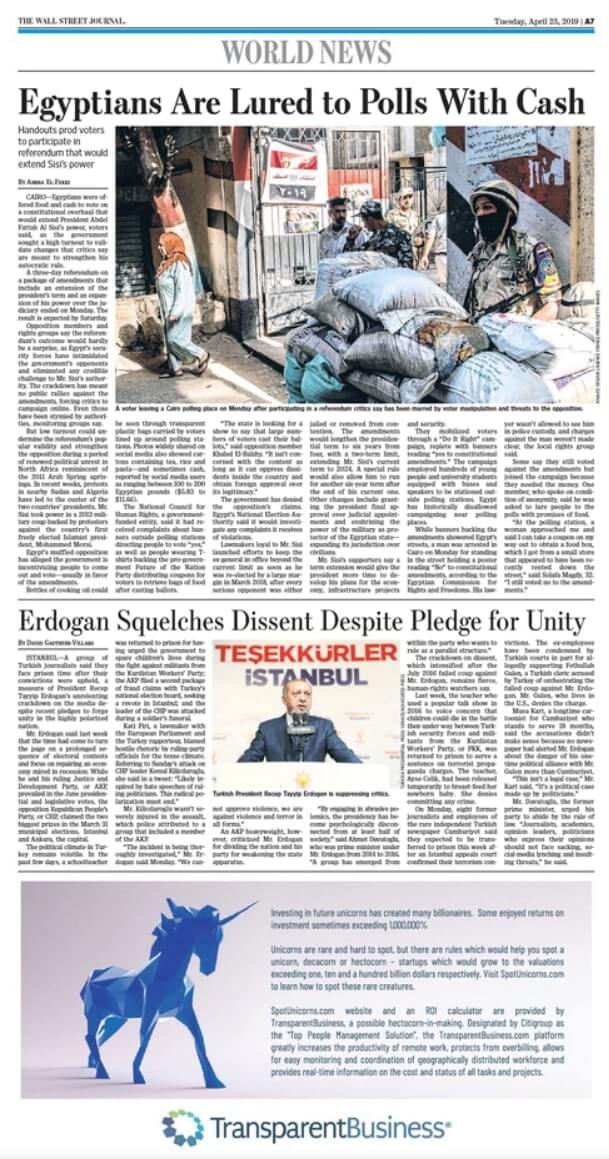 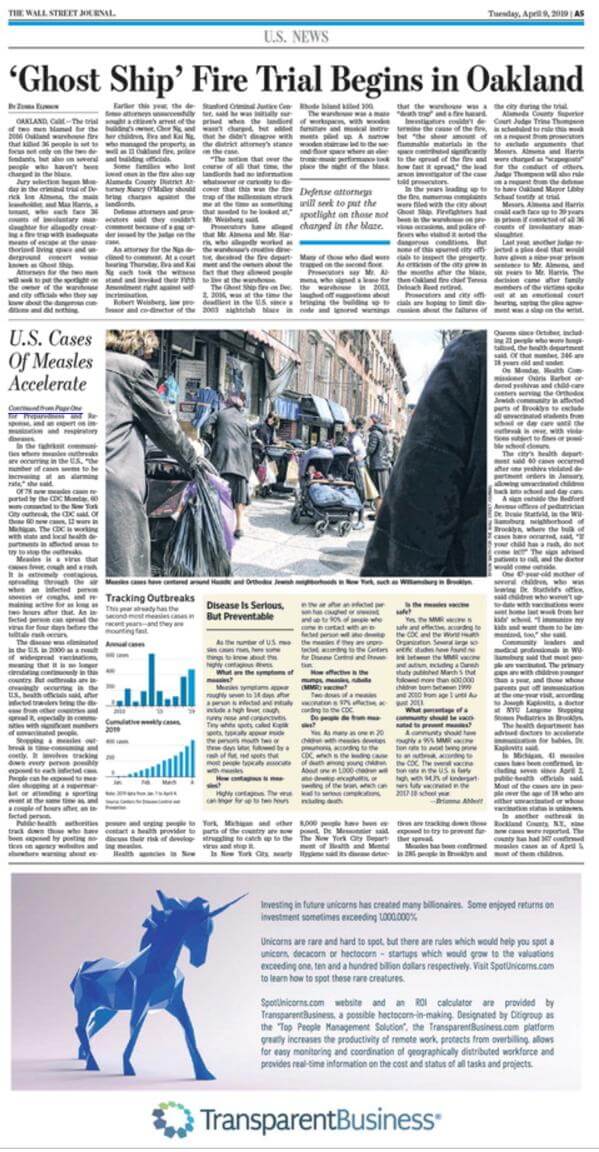 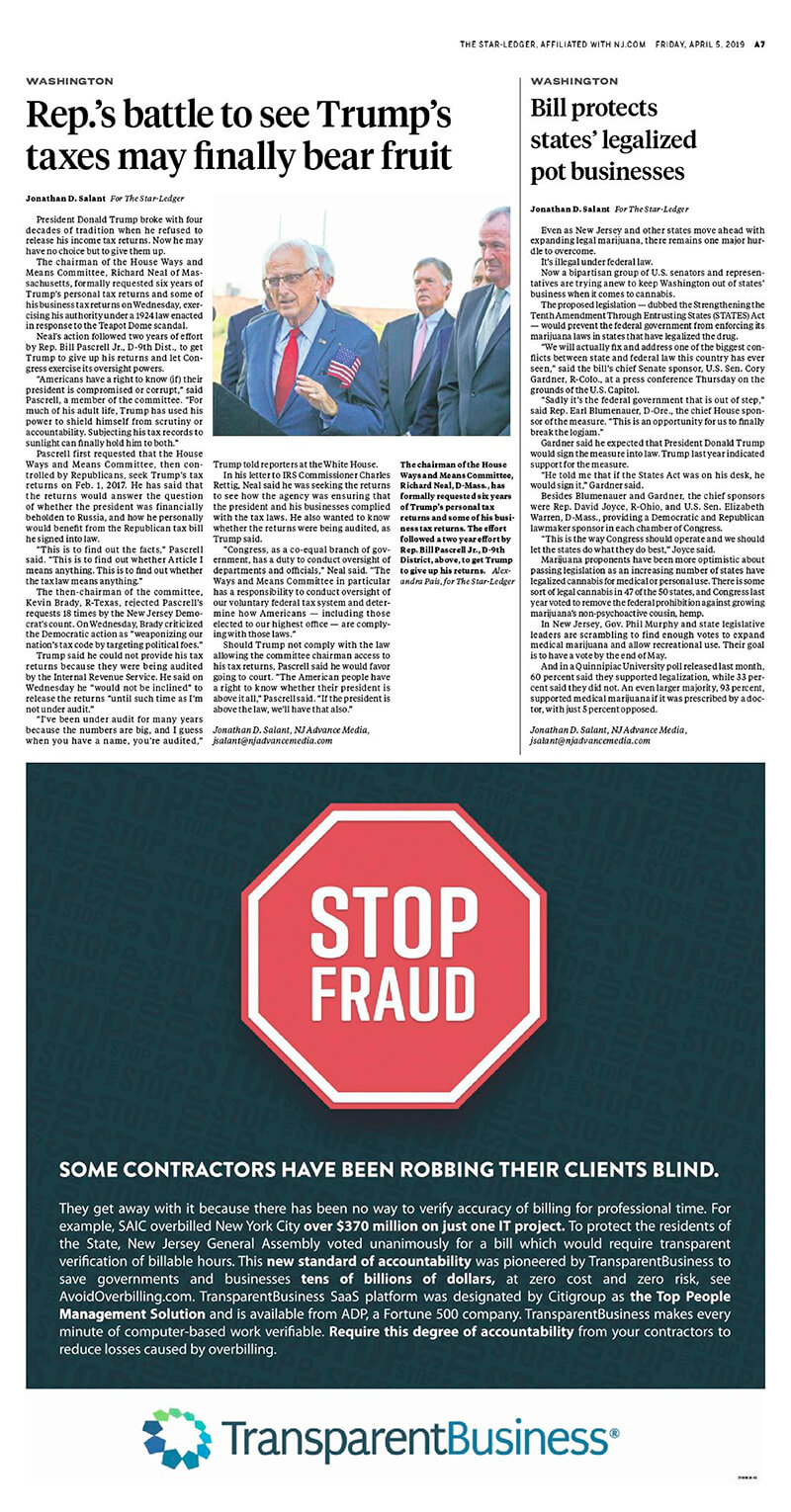 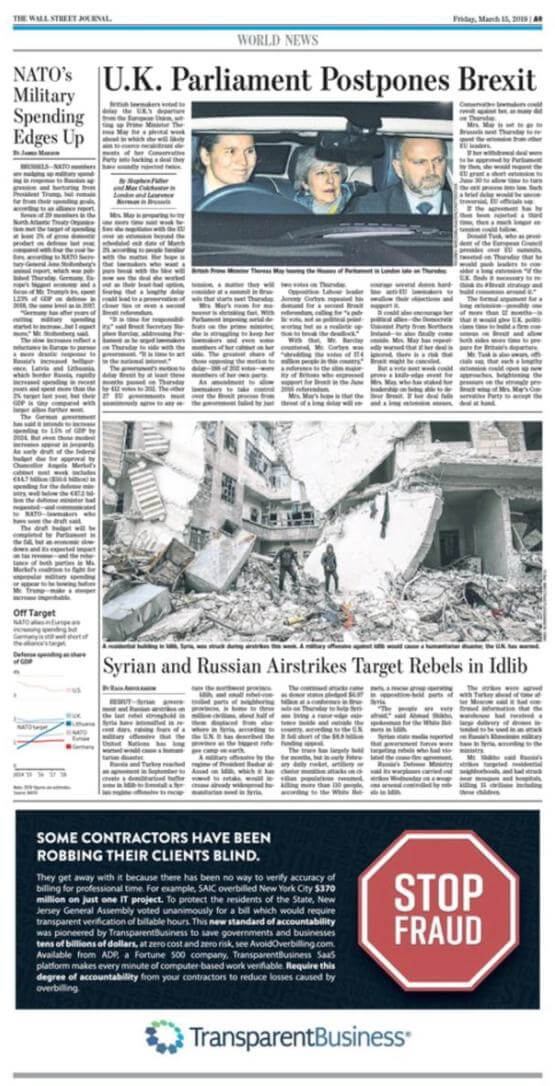 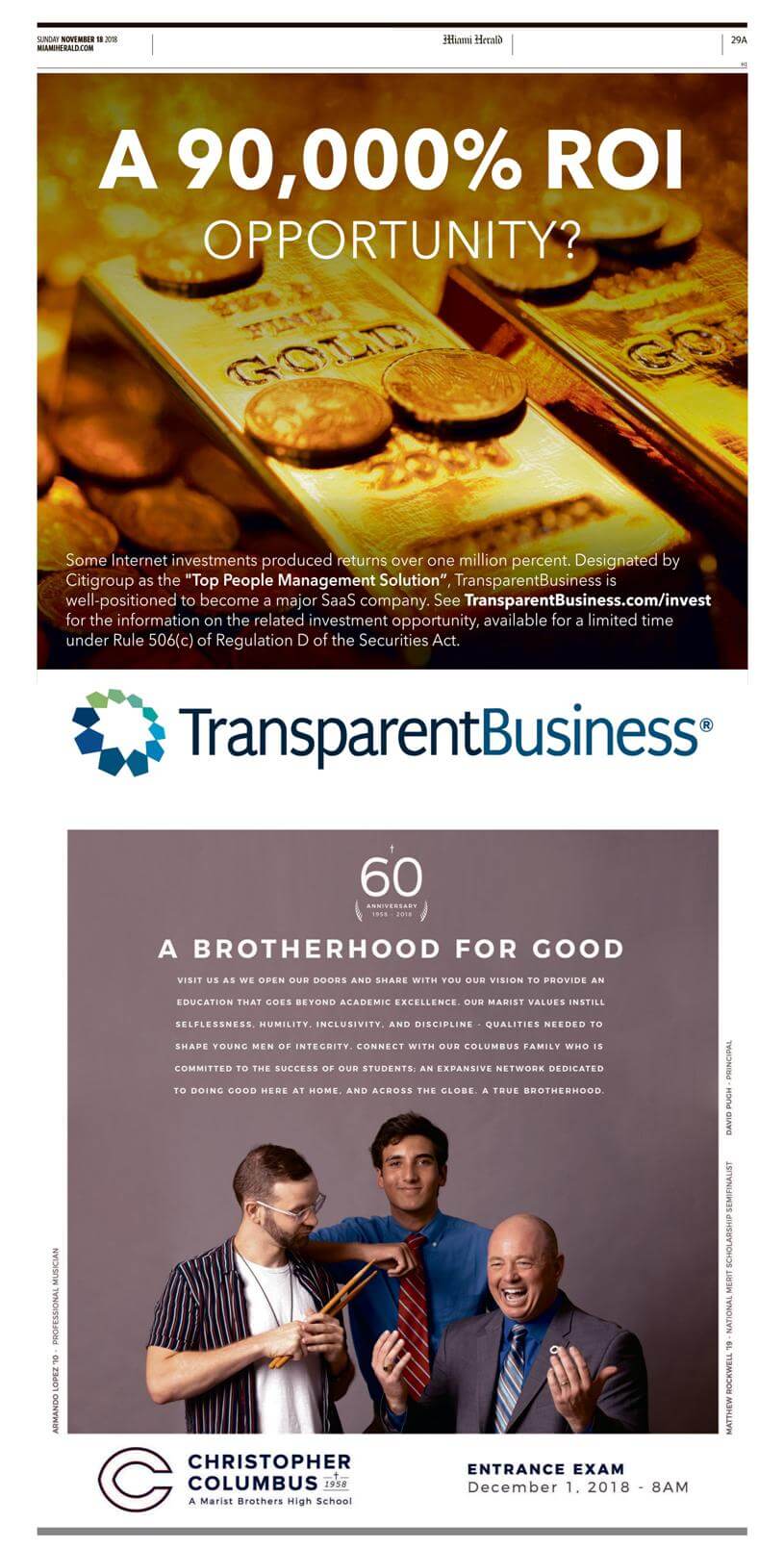 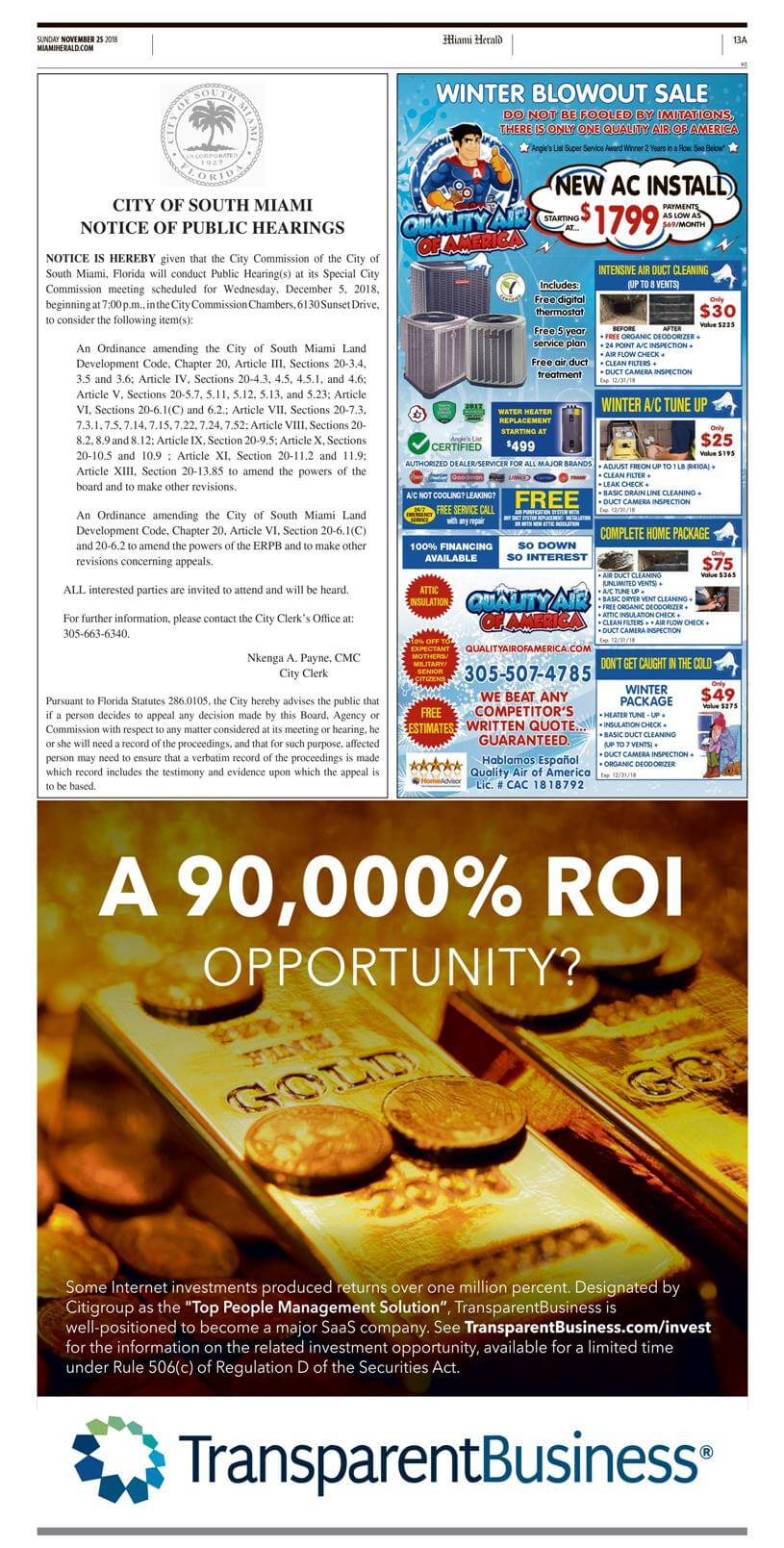 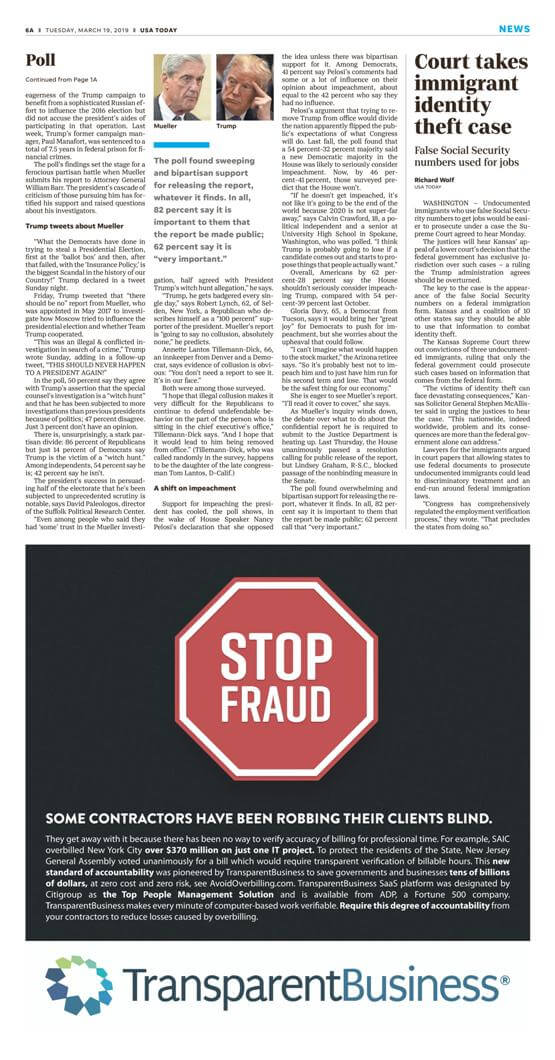 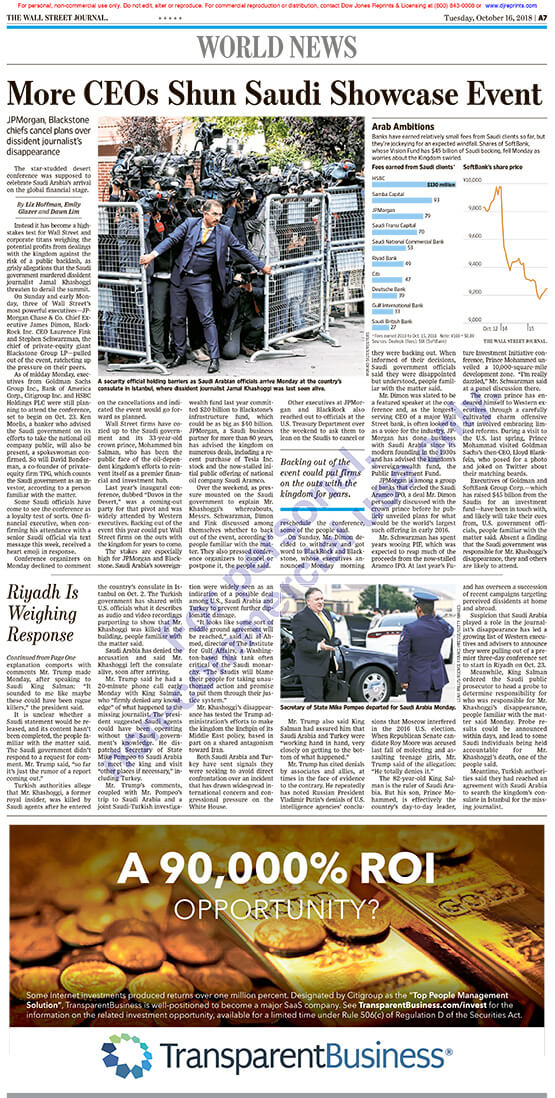 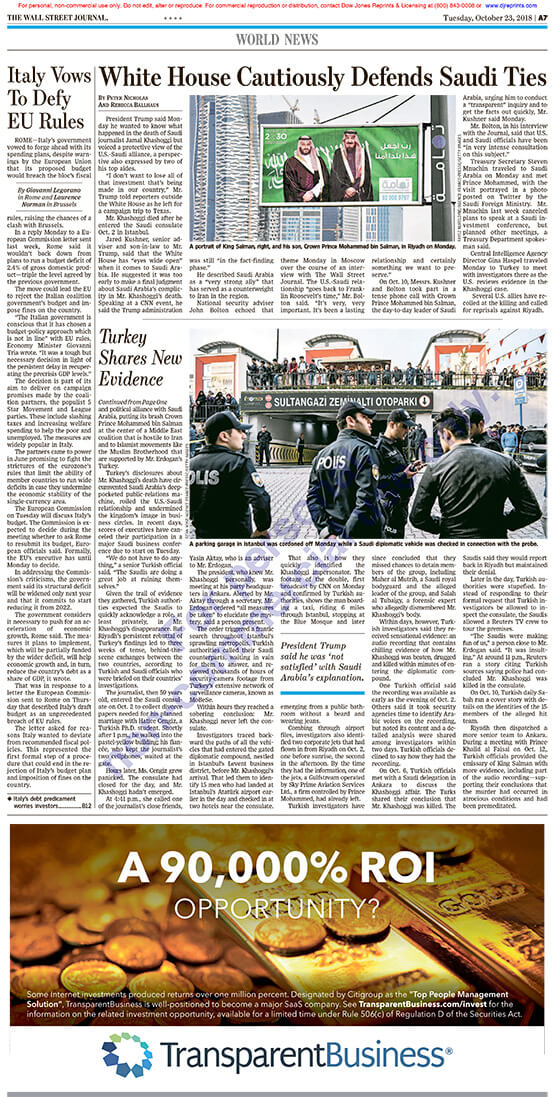 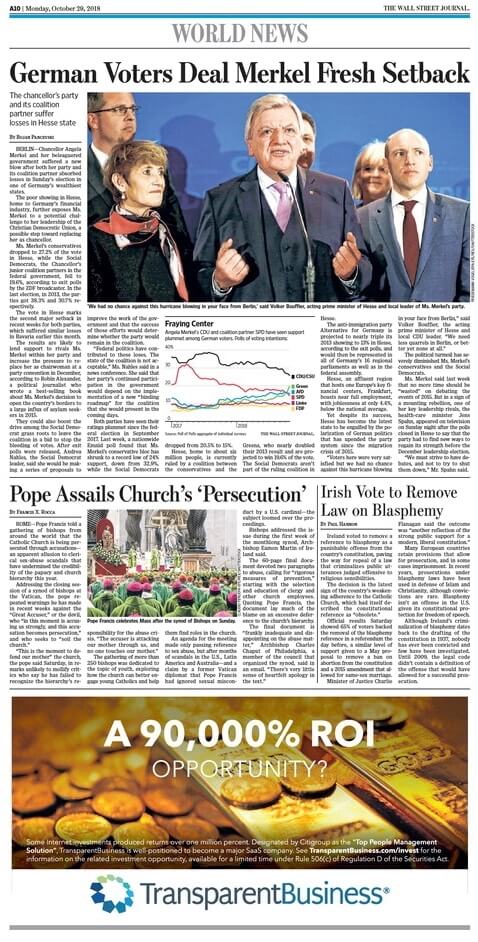 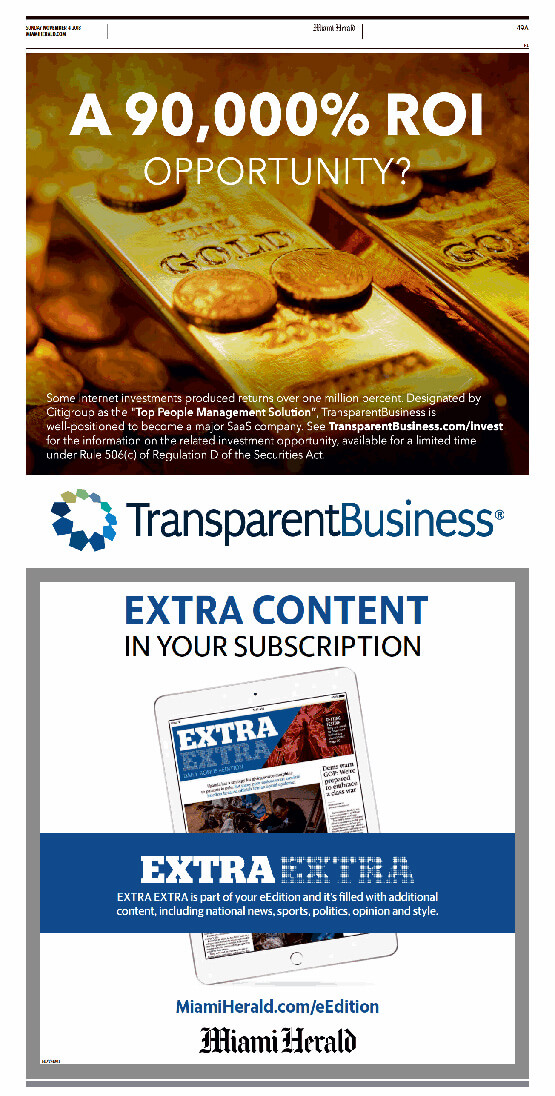 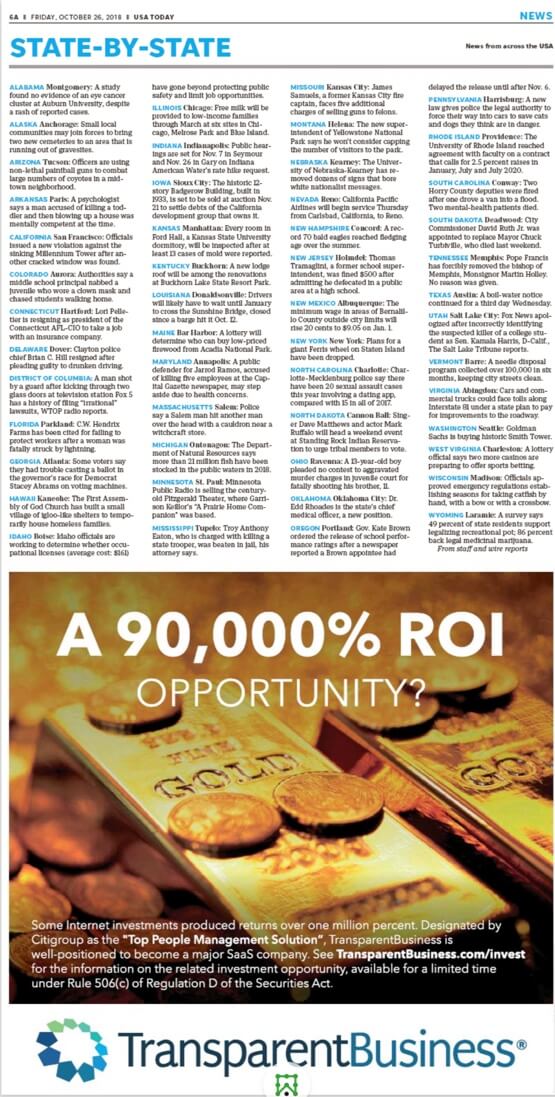 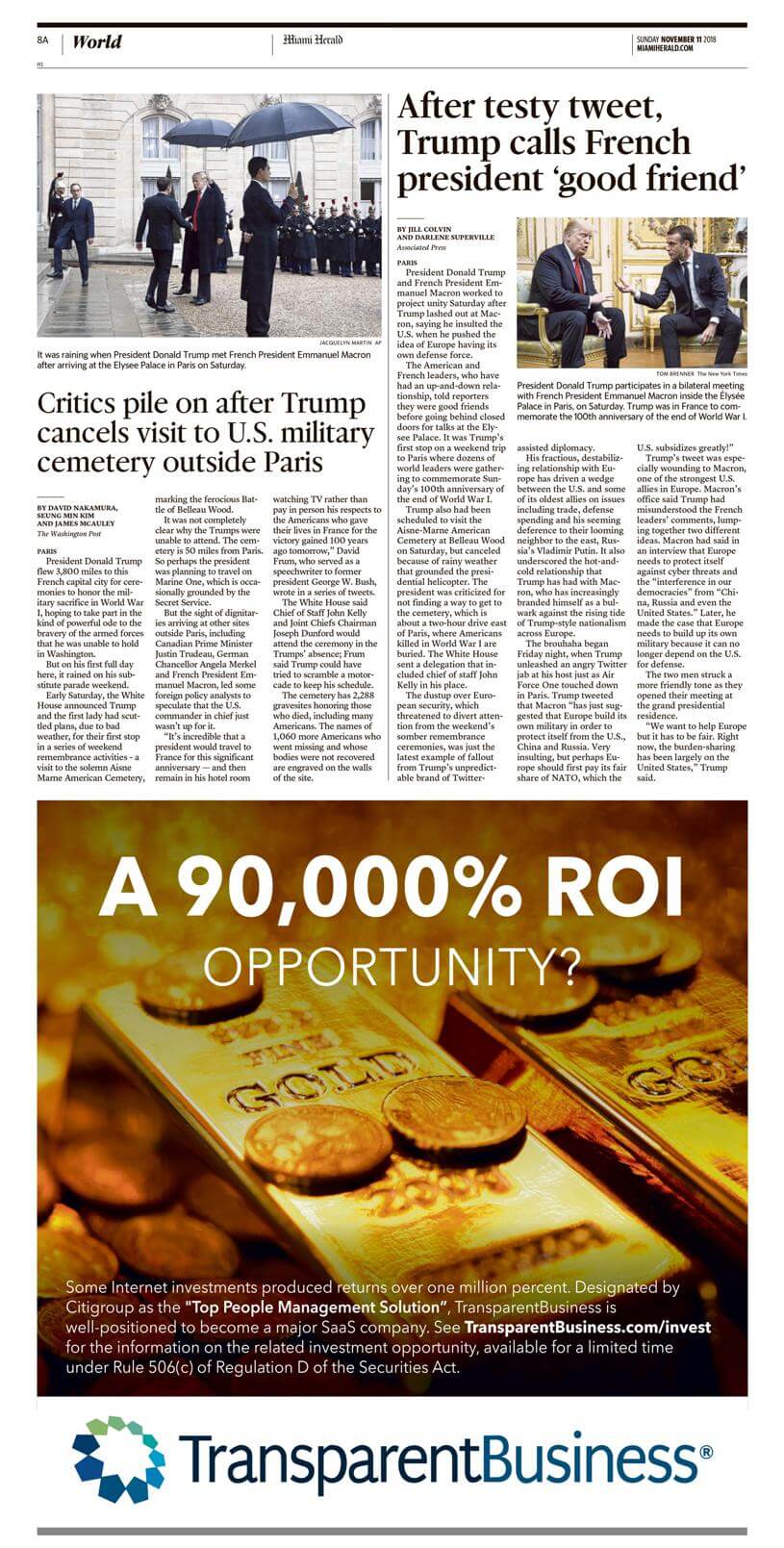 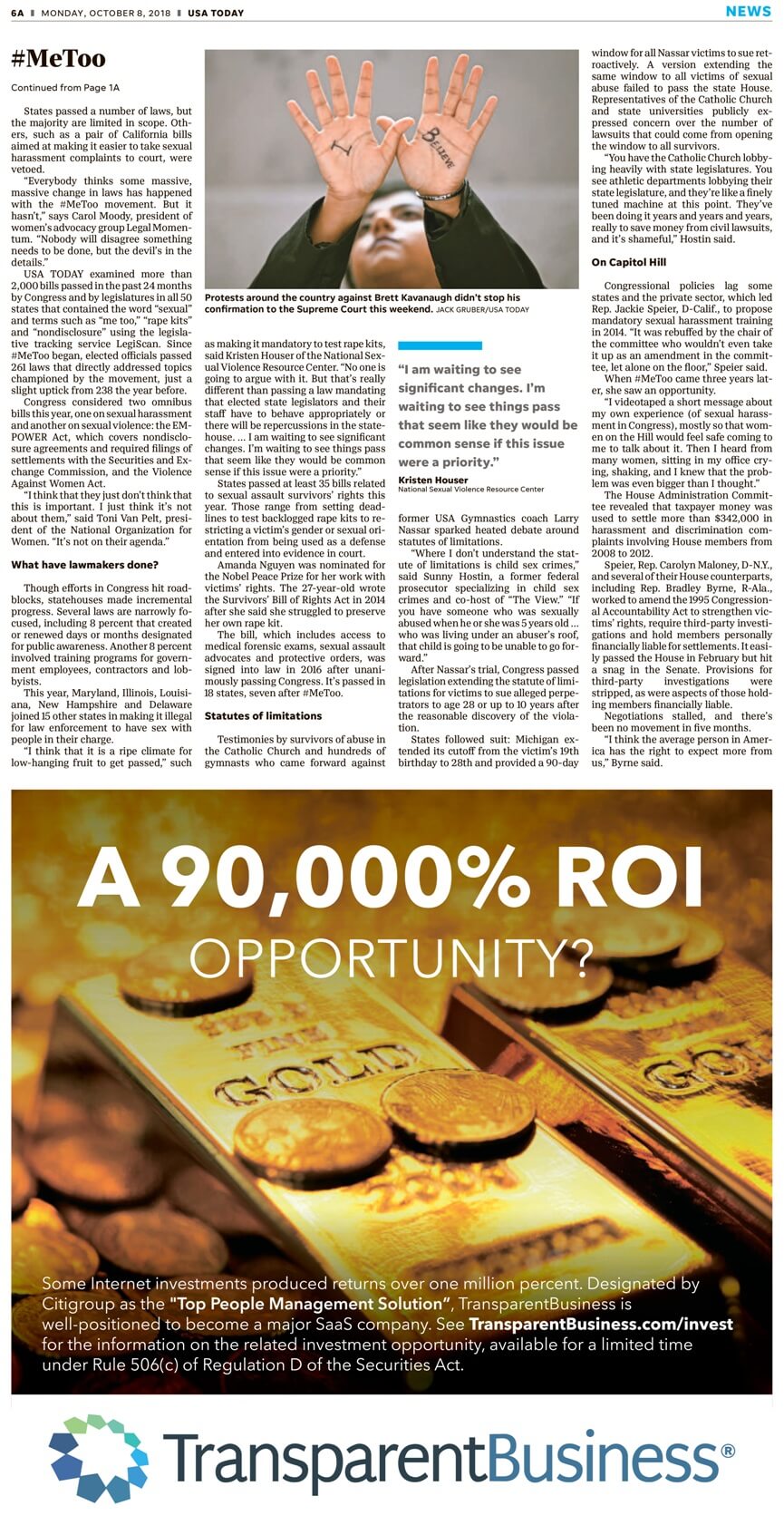 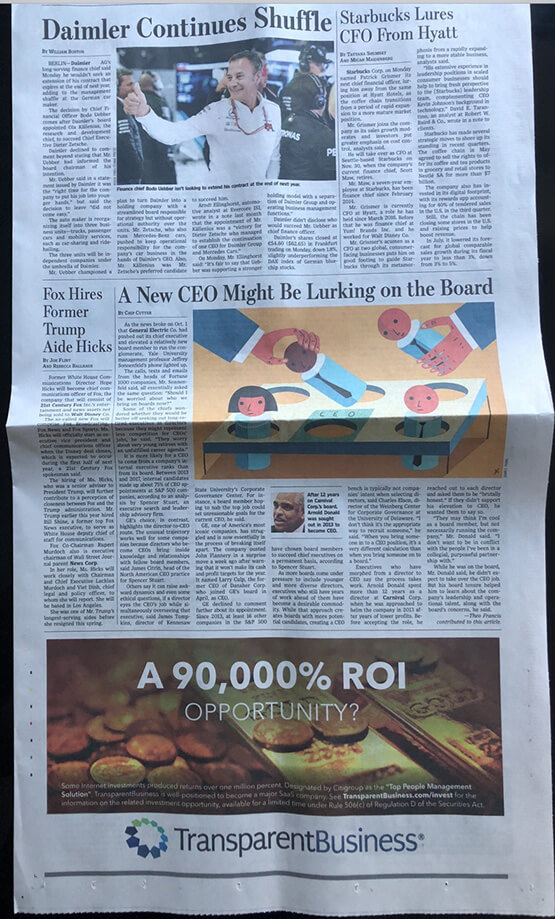 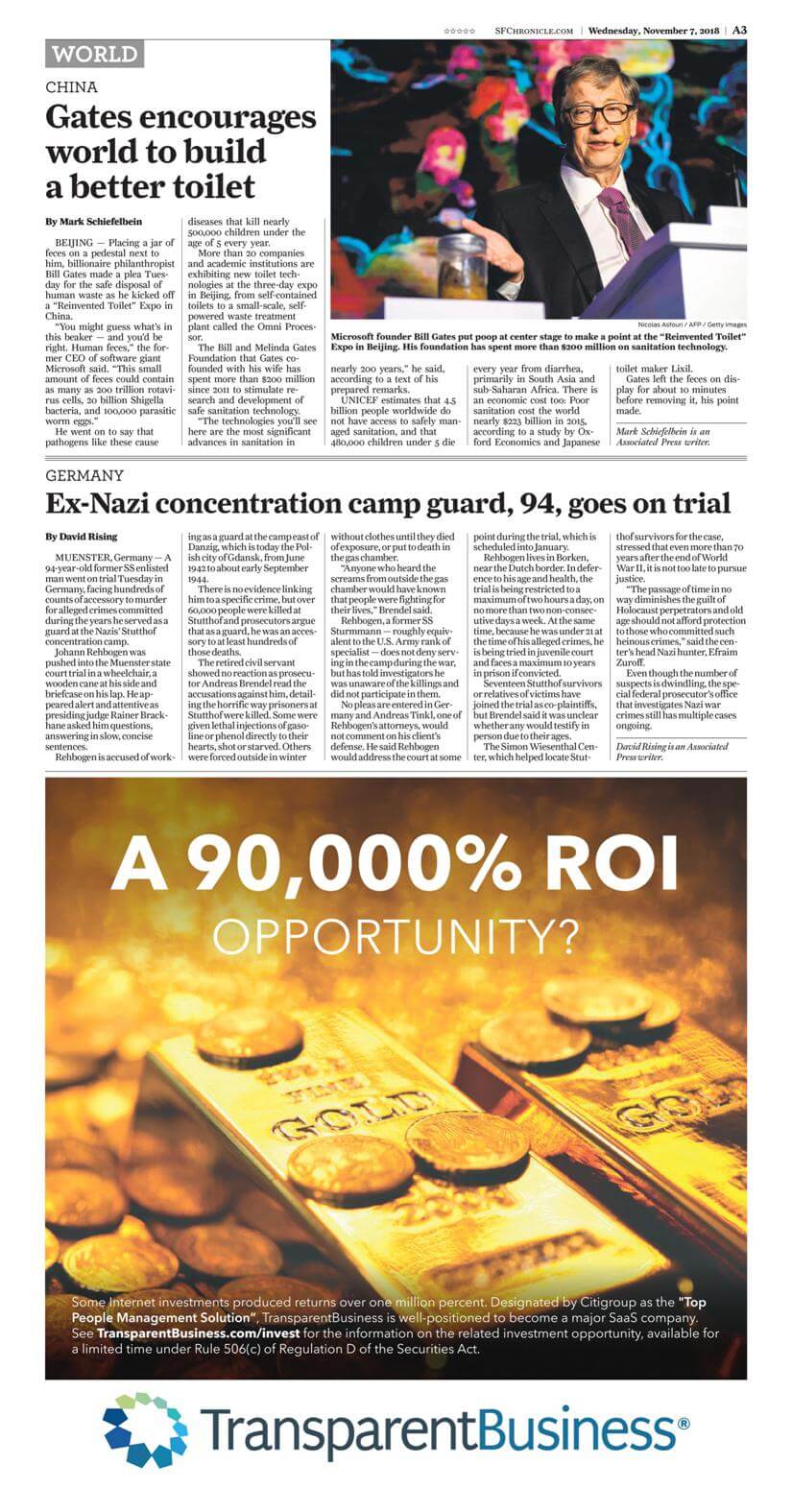 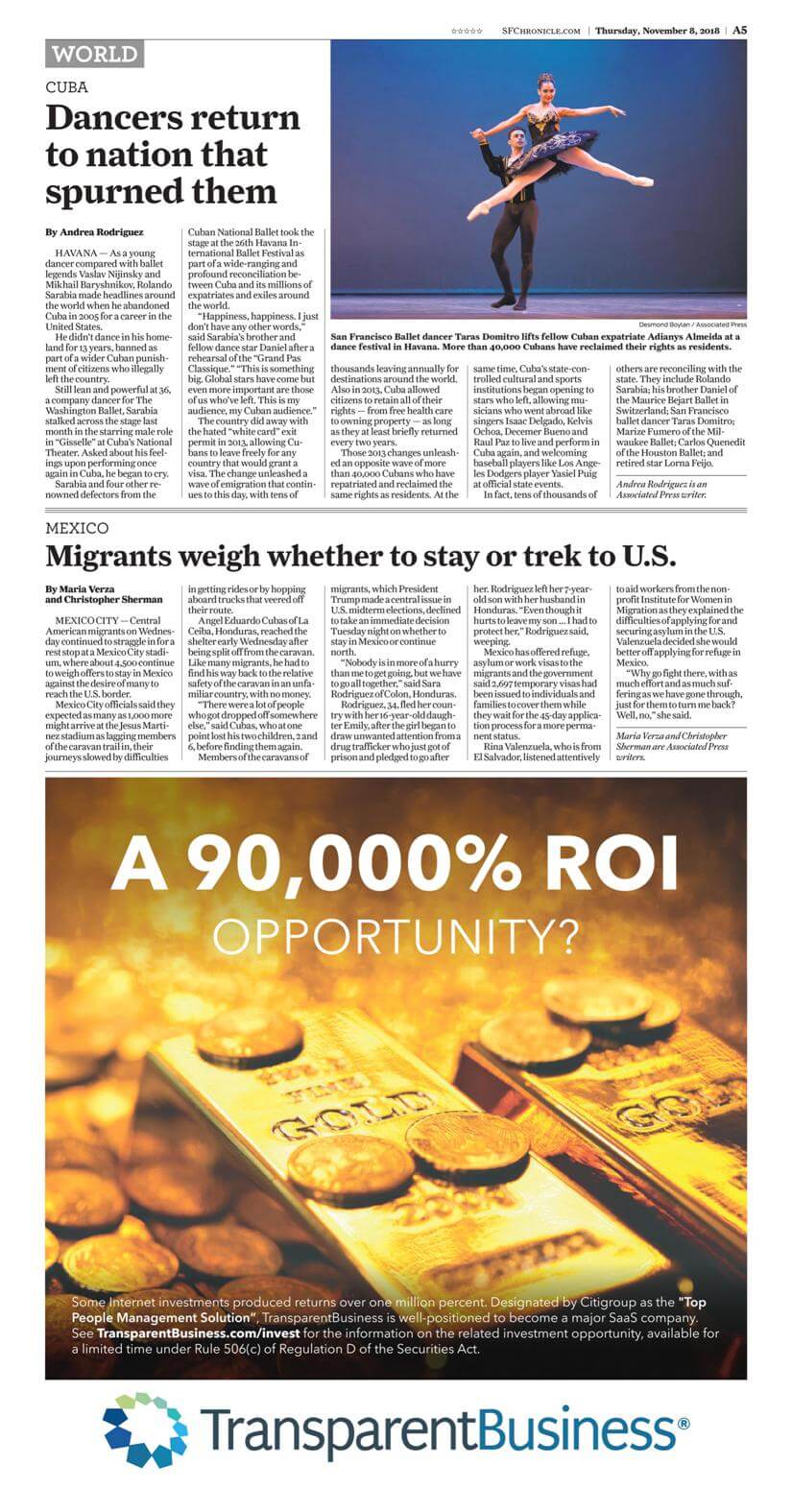 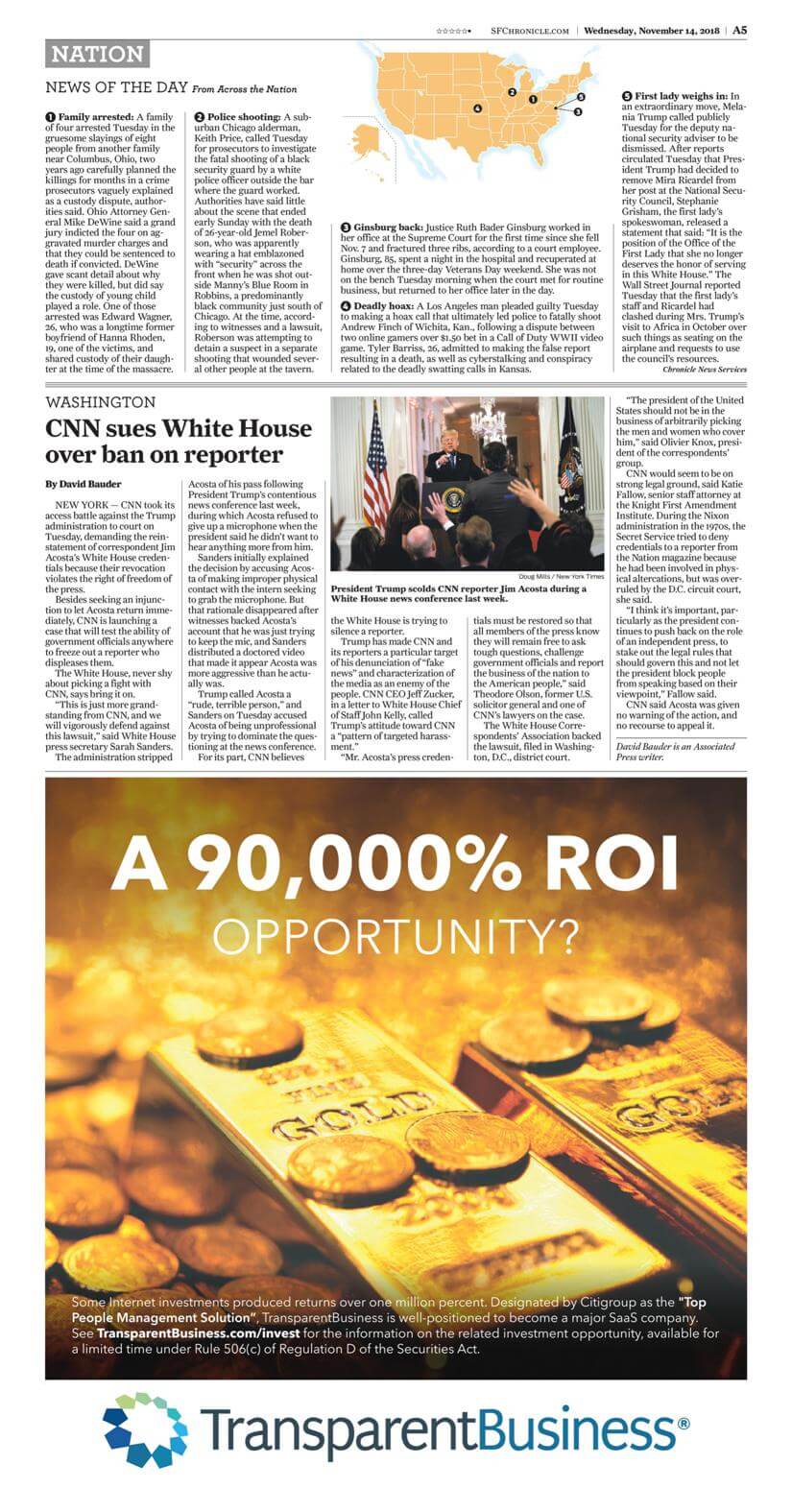 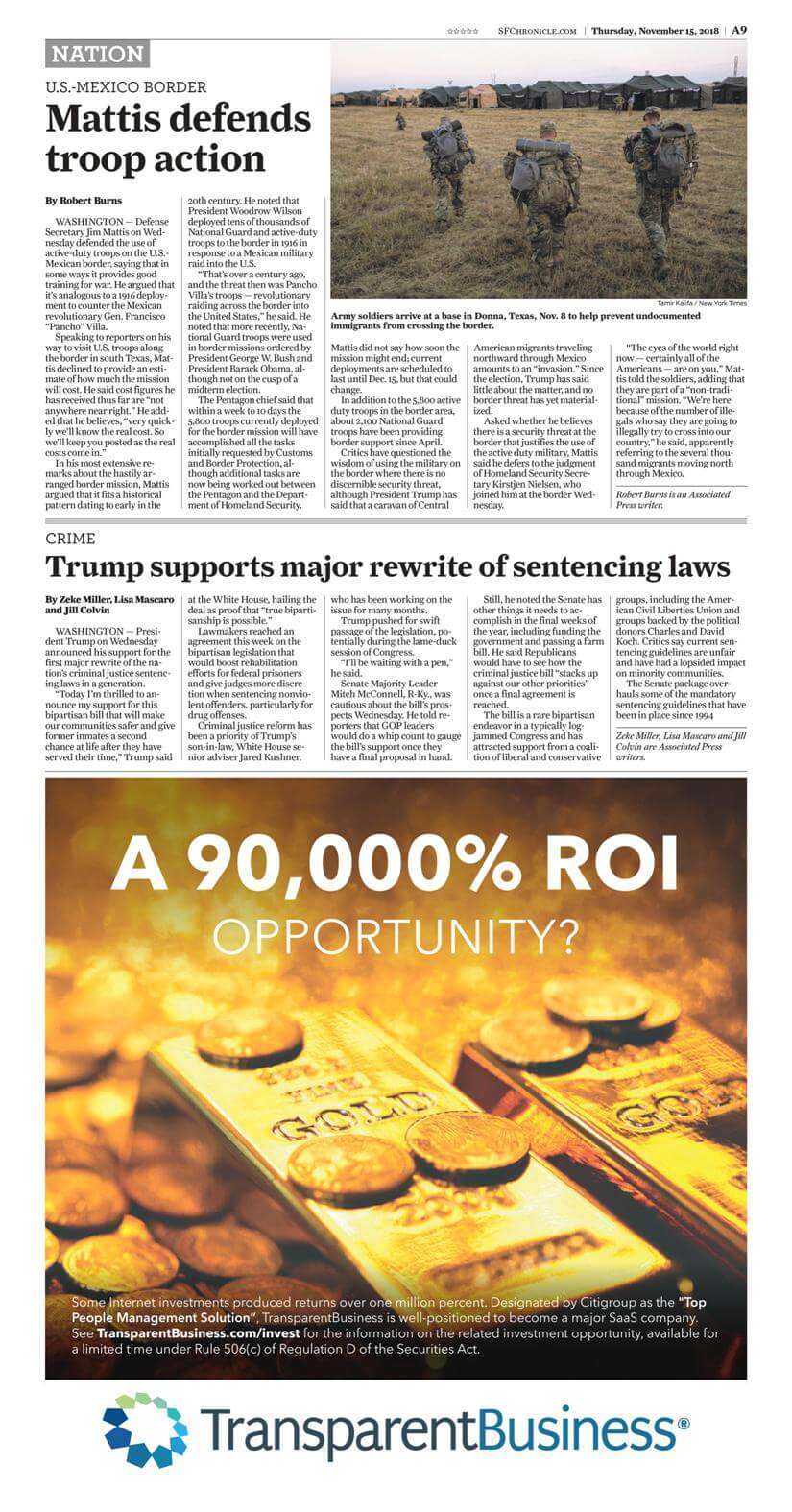 It’s easy to calculate the value of an opportunity based on known or estimated probabilities.

For example, the value of a coin flip is one dollar if you collect two dollars on heads and zero on tails.

If you were offered to play this game for 50 cents per flip, you’d be making money. But paying a dollar fifty per flip would be a money-losing proposition.

Paying the fair value for a flip is an attractive proposition for some but not for everyone. Some would invest a million dollars on a flip, excited by the opportunity to collect two million dollars if they are lucky; others would be afraid to lose a million if luck proves to be against them.

But those personal attitudes towards taking risks do not change the mathematical fact that the value of a coin flip equals fifty percent of what one stands to win.

Similarly, the value of rolling two dice would be one dollar if you collect $36 on Double Sixes but nothing with any other combination.

With this calculator, you can estimate the chances of three different outcomes: the total failure, the IPO, and major success, and can subsequently calculate the value of the opportunity.

For example, if you estimated the chances of the share rising to $1200 as 1%, then the value of this opportunity is $12.

So, the value of the positive outcomes would be $17.

But what about the remaining possibilities?

Well, fast business growth is typically exponential, never linear. So, the calculator adds the value of the exponential curve between the scenarios you estimated and discards the chances of a “total failure” scenario.

Of course, your estimates are just educated guesses; they are not mathematical certainties like in the coin or dice examples. But mathematical certainty does not exist in business, we all rely on our knowledge and experience in estimating probabilities. The calculator simply quantifies the mathematical value of your shares based on your input.

A Unicorn Opportunity?Are you seeking pre-IPO stock which may provide ROI over 100,000%?

Returns on investment in some Internet companies have been in the hundreds of thousands percentage points.

For example, early investors in Amazon saw their investment grow over TEN MILLION PERCENT and a high-school drop-out made over FIVE HUNDRED MILLION DOLLARS by investing sixty thousand dollars worth of graffiti-painting services into Facebook.

But how can you identify great investment opportunities?

They don’t come along often. Too many factors have to coincide. A huge market need. An easily scalable solution which perfectly addresses that need. Endorsements and validations which allow for fast acceptance of that solution. Absence of competition. A strong team which can achieve market domination.

TransparentBusiness meets all these criteria and can produce extraordinary returns on your investment; please see the video summary above.

In the United States, this investment opportunity is regulated by Rule 506(c) of the Regulation D, which permits “broad solicitation and general advertising” but limits the opportunity to accredited investors only (net worth over $1 million or income exceeding $200,000, see the detailed definition). Non-US investors may qualify under Regulation S. The minimum investment is $50,000. See our Investment Summary for detailed information and request the Private Placement Memorandum for the description of the terms and risks.

How our $10M round compares with funds raised by other companies

We'd be happy to respond to your questions

If TransparentBusiness reaches Salesforce’s valuation, your investment would increase in value over 120,000%

A huge return is a distinct possibility, given the unique combination of all factors required for a mega-success in a tech business:

Notes:
1/ IPO price is assumed to be the industry typical $20/share.
2/ In the “success” scenario, the valuation of the company will be the $120B valuation achieved by Salesforce.com on a much smaller market segment.
3/ Better scenarios are not considered out of abundance of conservatism. This estimate is not a guarantee of the results.

The Board of Directors of TransparentBusiness consists of five members:

In 2003 Fortune magazine called Silvina  “Miss Internet”  and she has since remained one of the most prominent Internet entrepreneurs, with hundreds of appearances on CNN and other networks, articles in scores of publications around the world and keynote appearances at major events.

The Wall Street Journal reported:
"Mr. Konanykhin was a whiz-kid physics student who became a pioneering Russian capitalist in early 1990s, building a banking and investment empire valued at an estimated $300 million all by his mid-20s.” In 1992, Alex defected to the United States and was granted political asylum for opposing corruption.

Director
Moises V. “Moe” Vela, Jr. is a lawyer and the first Hispanic to serve in two senior executive roles in the White House, first as Chief Financial Officer and Senior Advisor in the Office of Vice President Al Gore, and later as Director of Administration for Joe Biden, the Vice President of the United States.

Director
A former U.S. Ambassador to Spain. Prior to his diplomatic career, Amb. Costos had been an executive at HBO and Tod's with responsibilities encompassing global positioning, external relations, marketing and communications.

Beginning in 2002, Roel was appointed twice by President George W. Bush and confirmed by the US Senate as a Commissioner of the SEC, serving until 2007. During his tenure, Roel presided over hundreds of complex enforcement cases and rulemakings, involving the full range of federal securities laws.

TransparentBusiness team is working on making transparent verification of billable hours the new standard of public procurement. Such transparency will save billions of dollars to taxpayers, by protecting public funds from overbilling by contractors, see our AvoidOverbilling.com.

As the result of us demonstrating the benefits of TransparentBusiness to politicians across the country, legislators in 32 states have introduced the bills which seek to make such transparency mandatory for government contractors. On the photos, Silvina Moschini, the co-founder of TransparentBusiness, with Joe Biden and Senator Corey Booker.

Excerpts. TheDeal is a media channel of TheStreet.com

... a New York-based software startup called TransparentBusiness Inc. has drawn backing from Fortune 500 executives through a relatively new type of securities offering called 506(c) as part of an effort to raise $10 million this year.

Alex Konanykhin, CEO of TransparentBusiness, said he decided to reach out directly to accredited investors by purchasing ads in financial publications. One particularly bold ad includes the figure, 90,000%, with a question mark next to it.

Konanykhin said the ad speaks to the large market opportunity for his company's software, which helps governments eliminate fraud by verifying billable hours charged by outside contractors. ...

Thus far, TransparentBusiness Inc. has raised about $500,000 under the 506(c) offering plus an earlier round of about $1.5 million through a convertible offering. It's currently offering 10 percent of the company for $10 million, with a minimum investment of $50,000.

One of the investors, Ken Arredondo, told The Deal he invested in TransparentBusiness and agreed to serve on its board of directors because of the company's strong management team and the huge market opportunity to increase transparency of outsourced contracts worldwide. He believes in the company's product and said it's unique.

"It's a Saas-based, easy-to-use tool," he said. "There are a lot of technology players out there that are a lot bigger, but none of them have what they have. There will be competition, but they have the product now. They have first-mover advantage."

Arredondo plans to keep his investment in the company for at least two to five years. By then, the company could be large enough for an IPO or a sale.

A 506(c) offering, unlike other private offerings such as private-investments-in-public-equity, or PIPE deals, don't carry the same restrictions around the marketing of private offerings. (continue reading).

...Just a few years ago, a software contractor over billed New York City more than $500 million dollars on a single municipal project.

Given that Rhode Island spends hundreds of millions of dollars annually on large, complex professional service contracts, I am concerned the state is vulnerable to similar examples of time sheet fraud. That’s why I have introduced legislation (H-7788) that requires the transparent verification of billable activity.

In the absence of such verification, our agency auditors cannot verify the accuracy of contractual billing, so the state essentially pays contractors on the honor system, leaving open the possibility for fraud, waste and abuse. Further, state officials cannot efficiently monitor the status of ongoing, complex contracts, one of the major reasons we have seen some projects go far over budget and past deadlines.

To remedy the situation, my legislation would require that state contractors use newly available transparency and accountability tools to ensure that they are staying on task toward delivering contractually promised system functionalities.

By requiring vendors to use software that periodically takes screenshots of work being performed and provides automated real-time cost status of key tasks, we can significantly increase our capacity to manage complex projects, while protecting the state from padded invoices and time sheet fraud.

These software tools, such as TransparentBusiness from leading payroll and human services provider ADP, are already in use in the private sector, and Rhode Island can take advantage of these best practices in managing its state contractors.

By Brian Patrick Kennedy, the Speaker pro tempore of the House of Representatives of Rhode Island.

Your inquiry was submitted to our Investor Relations staff for review and response. 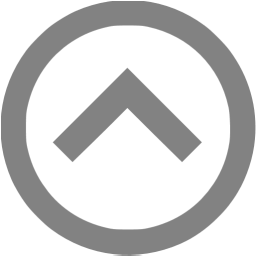