The Queen of the Internet

Silvina Moschini, the Chairwoman and President of TransparentBusiness, is often called “Miss Internet” by CNN and some other news media. It seems that Silvina has just got a promotion: a new article summarizing her achievements is called "The Queen of the Internet":

(the translation to English can be found below) 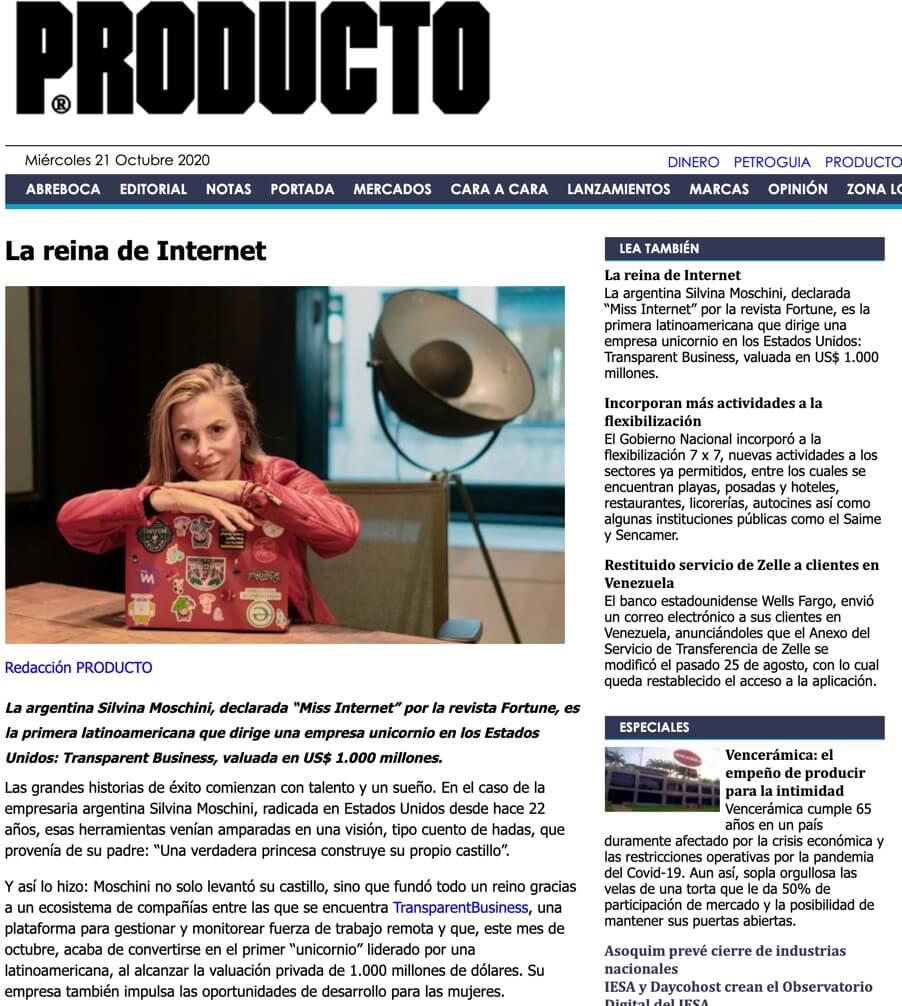 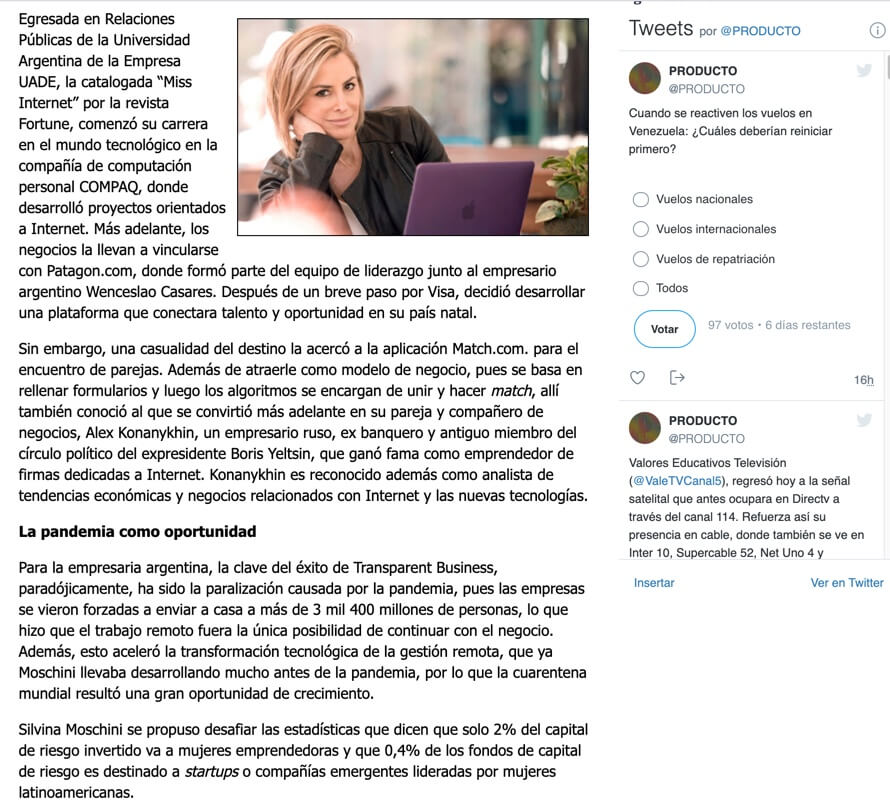 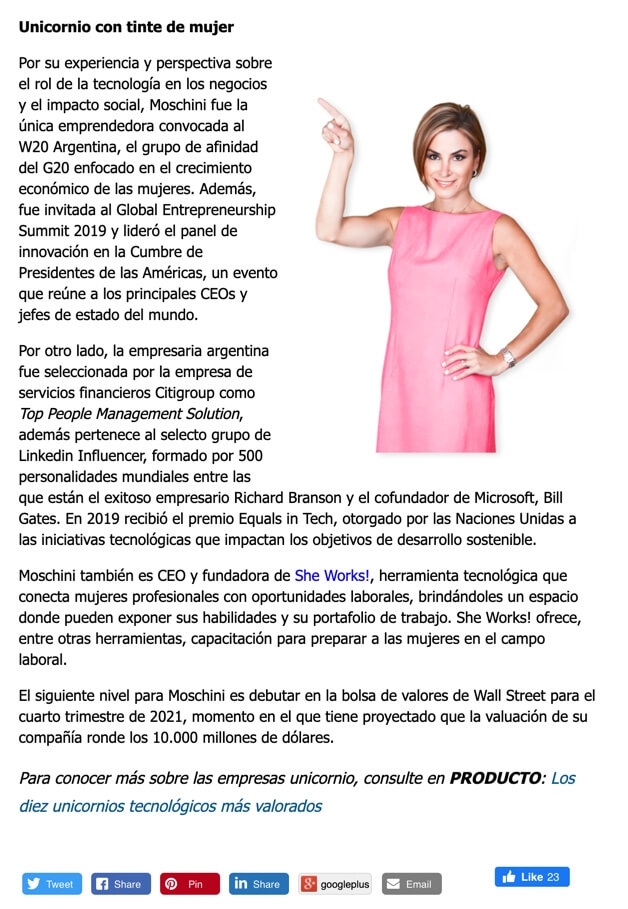 The Queen of the Internet

By Editorial Staff of PRODUCT

Argentine Silvina Moschini, named "Miss Internet" by Fortune magazine, is the first Latin American woman to run a unicorn company in the United States: Transparent Business, valued at US $1 billion.

Great success stories start with talent and a dream. In the case of the Argentine businesswoman Silvina Moschini, who's lived in the United States for 22 years, these tools came under the cover of a vision, like a fairy tale, that came from her father: "A real princess builds her own castle"

And so she did: Moschini not only built her castle, but also founded a whole kingdom thanks to an ecosystem of companies, including a platform to manage and monitor remote workforce and that, this October, just to become the first "unicorn" led by a Latin American woman, reaching a private valuation of one billion dollars. Her company also promotes development opportunities for women.

Graduated in Public Relations from the Universidad Argentina de la Empresa UADE, names "Miss Internet" by Fortune magazine, she began her career in the technological world at the personal computer company COMPAQ, where she developed Internet-oriented projects. Later, business led her to link up with Patagon.com, where she was part of the leadership team with Argentine businessman Wenceslao Casares. After a brief stint at VISA, she decided to develop a platform that would connect talent and opportunity in her native country.

However, a chance of fate brought her to the Match.com app for the meeting of couples. In addition to attracting her as a business model, since it is based on filling in forms and then algorithms are in charge of connecting and matching, there she also met the one who later became his partner and business partner, Alex Konanykhin, a Russian businessman, a former banker and former member of the political circle of former President Boris Yeltsin, who gained fame as an Internet entrepreneur. Konanykhin is also recognized as an analyst of economic trends and businesses related to the Internet and new technologies.

The pandemic as an opportunity

For this Argentine businesswoman, the key to the success of TransparentBusiness, paradoxically, has been the paralysis caused by the pandemic, as companies were forced to send more than 3.4 billion people home, which made remote work the only possibility of continuing the business. In addition, the pandemic accelerated the technological transformation of remote management, which Moschini had already been developing long before the pandemic, so the global quarantine was a great growth opportunity.

A Unicorn with a female tint

Due to her experience and perspective on the role of technology in business and social impact, Moschini was the only entrepreneur invited to participate in W20 Argentina, the G20 affinity group focused on the economic growth of women. In addition, she was invited to the Global Entrepreneurship Summit 2019 and led the innovation panel at the Summit of Presidents of the Americas, an event that brings together the world's top CEOs and heads of state.

[The platform of] this Argentine businesswoman was selected by the financial services company Citigroup as Top People Management Solution, and she also belongs to the select group of Linkedin Influencers, made up of 500 global personalities among which are the successful businessmen like Richard Branson and the co-founder of Microsoft Bill Gates. In 2019 she received the Equals in Tech award, awarded by the United Nations to technological initiatives that impact the sustainable development goals.

Moschini is also CEO and founder of She Works!, a technology tool that connects professional women with job opportunities, providing them with a space where they can showcase their skills and work portfolio. SheWork! offers, among other tools, training to prepare women for the labor field.

The next level for Moschini is to debut on the Wall Street Stock Exchange in the fourth quarter of 2021, at which point she is projected to have her company's valuation of around $10 billion.