We are pleased to report that EFE, the world's fourth-largest wire service after the Associated Press, Reuters, and AFP, prepared and distributed a news report about TransparentBusiness becoming a unicorn.

The report was published by various publications, including Yahoo Finance and El Financiero (The Financier). 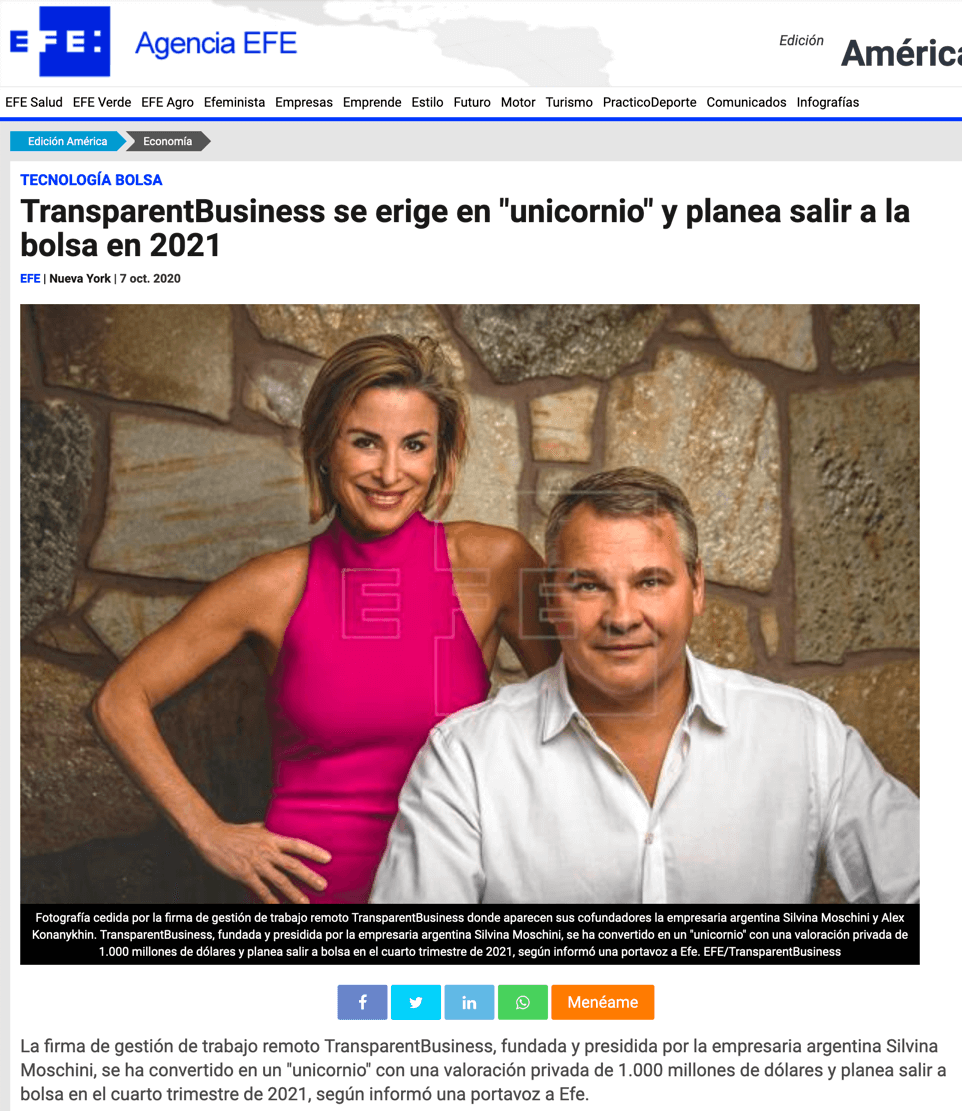 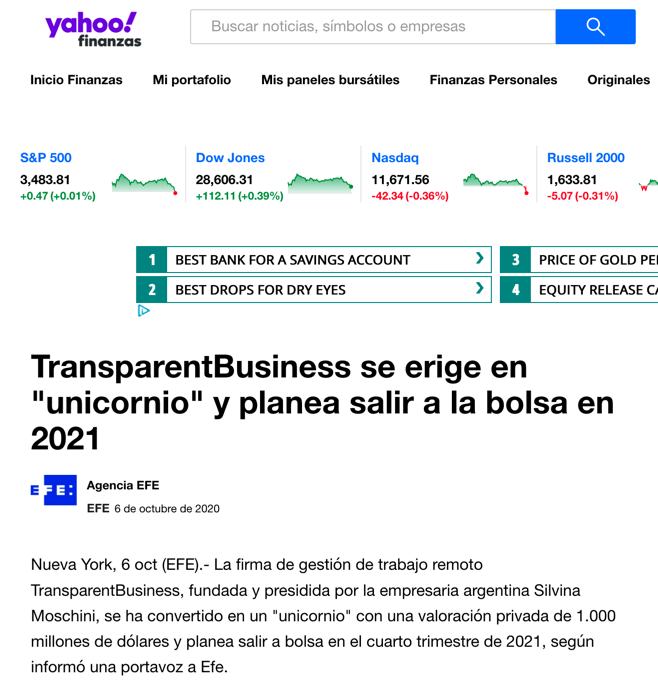 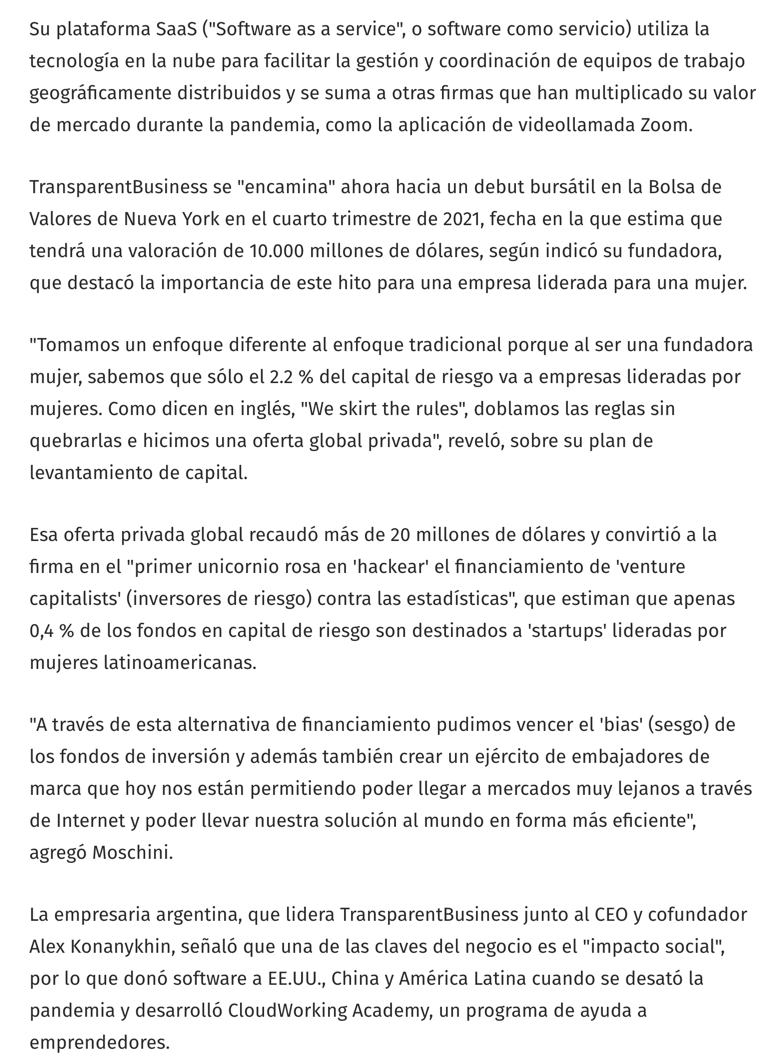 TransparentBusiness is now "on its way" for a listing on the New York Stock Exchange in the fourth quarter of 2021, when it estimates it will be valued at $10 billion.

New York, Oct 6 (EFE) - The remote work management firm TransparentBusiness, founded and chaired by Argentine businesswoman Silvina Moschini, has become a "unicorn" with a private valuation of $1 billion and plans to go public in the fourth quarter of 2021, according to the information provided by a spokeswoman to EFE.

TransparentBusiness, which Moschini created in 2012, has grown with the "technological boom caused by the COVID-19 pandemic" in recent months and this Tuesday the company opened an investment round that takes it to a "de facto" valuation of $1,000 million, placing it as a "unicorn" along with 488 other companies around the world.

"COVID-19 caused a Big Bang-like explosion for remote work management solutions. With half the planet confined to their homes, millions of companies were forced to implement models that allow them to manage their geographically distributed workers in efficient and verifiable manner,” Moschini said.

Its SaaS platform ("Software as a Service") uses Cloud technology to facilitate the management and coordination of geographically distributed work teams and joins other firms that have multiplied their market valuation during the pandemic, such as the Zoom video calling app.

TransparentBusiness is now "heading" towards a stock market debut on the New York Stock Exchange in the fourth quarter of 2021, a date on which it estimates it could be valued at $10 billion, according to its founder, who highlighted the importance of this milestone for a company led by a woman.

"We take a different approach to the traditional approach because being a female founder, we know that only 2.2% of the venture capital goes to companies led by women. As they say in English,"We skirt the rules", we bend the rules without breaking them and we made a Global Private Offering,” she revealed about her capital raising plan.

This Global Private Offering has raised more than $20 million and made the firm the "first pink unicorn to 'hack’ the venture capital financing, overcoming the odds", with only estimated 0.4% of the VC funding going to 'startups' led by Latin American women.

"Through this financing alternative we were able to overcome the 'bias' (bias) of investment funds and also create an army of brand ambassadors that today are allowing us to reach very distant markets through the Internet and be able to carry our solution to the world more efficiently,” added Moschini.

The Argentine businesswoman, who leads TransparentBusiness together with CEO and co-founder Alex Konanykhin, pointed out that one of the keys to the business is "social impact", which is why she donated software to the US, China and Latin America when the pandemic broke out and developed CloudWorking Academy, a program to help entrepreneurs.

TransparentBusiness allows you to hire talent through SheWorks!, a platform that connects professional women with job opportunities and that received the EQUALS In Tech award in 2019, with which the United Nations recognizes innovative projects focused on closing the gender gap through technology . EFE