We are pleased to share with you an extensive interview with Silvina Moschini, a co-founder, Chairwoman and President of TransparentBusiness,  published in one of the most read publication of Chile:

Silvina Moschini, First Latin American Partner of a “Unicorn” Startup: “To Build a Unicorn One Must Have a Market That Urgently Needs a Solution” 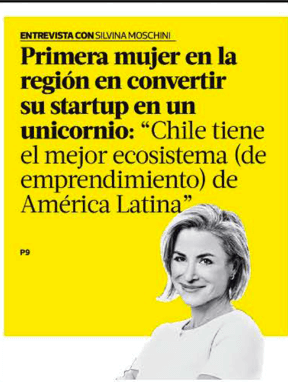 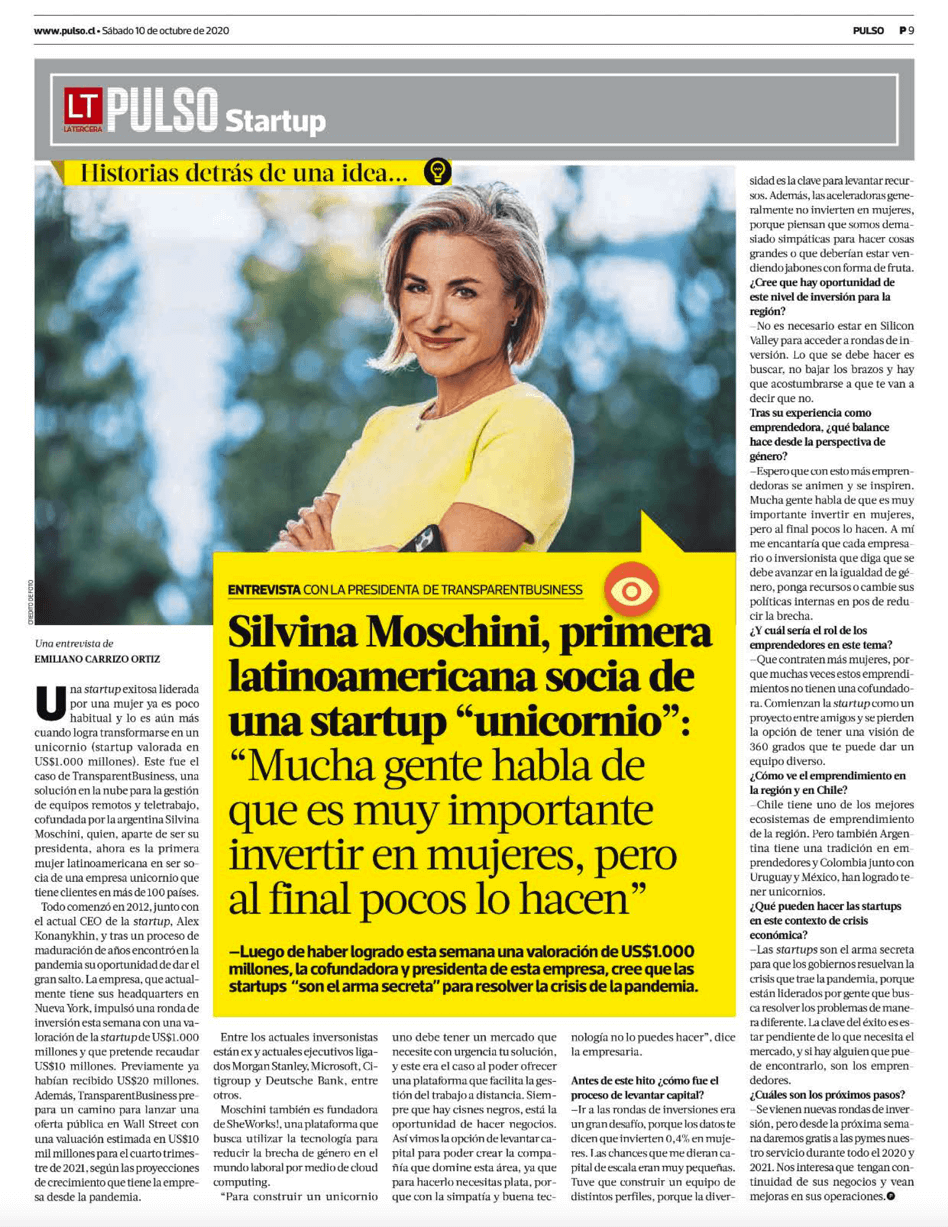 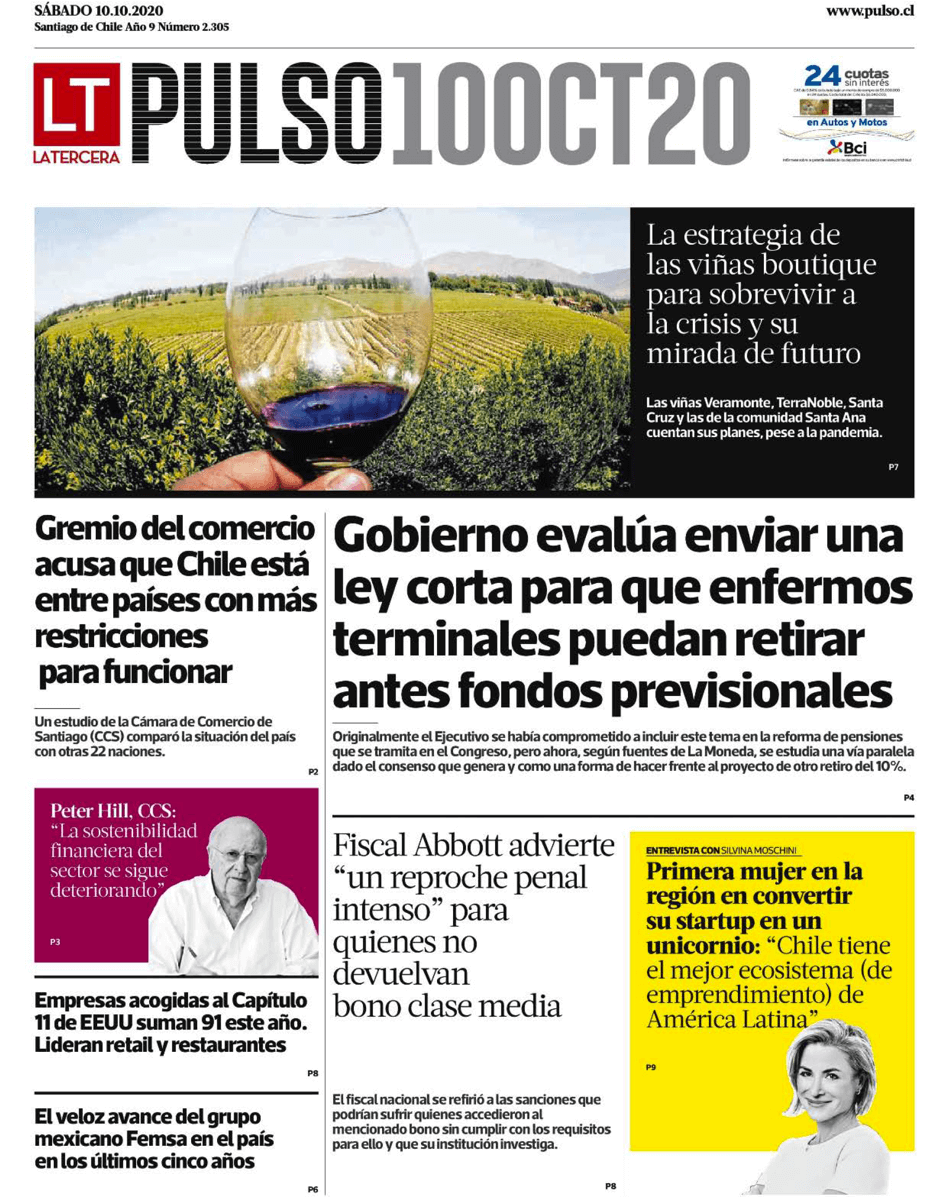 Silvina Moschini, First Latin American Partner of a “Unicorn” Startup: “To Build a Unicorn One Must Have a Market That Urgently Needs a Solution”
Emiliano Carrizo
OCT 9, 2020 09:32 PM

After having achieved a valuation of US $1 billion this week, the co-founder and president of TransparentBusiness, believes that startups "are the secret weapon" to solve the crisis of the pandemic.

A successful startup led by a woman is rare by itself and it is even more rare when it succeeds in transforming itself into a unicorn (a startup valued at US $ 1 billion). This was the case with TransparentBusiness, a Cloud solution for remote team management and teleworking, co-founded by Silvina Moschini from Argentina, who, apart from being its President, is now the first Latin American woman to be a partner of a unicorn company that has clients in more than 100 countries.

It all started in 2012, together with the current CEO of the startup, Alex Konanykhin, and after a process of maturing for years, she found her opportunity to make the big leap in the pandemic. The company, which is currently headquartered in New York, launched an investment round this week with a startup valuation of US $1 billion and which aims to raise US $10 million. They had previously received US $20 million. In addition, TransparentBusiness prepares a path to launch a public offering on Wall Street with an estimated valuation of US $10 billion for the fourth quarter of 2021, according to the growth projections that the company has since the pandemic.

Among the current investors are former and current executives linked to Morgan Stanley, Microsoft, Citigroup and Deutsche Bank, among others.

Moschini is also the founder of SheWorks!, a platform that seeks to use this technology to reduce the gender gap in the world of work through cloud computing.

“To build a unicorn you must have a market that urgently needs your solution, and this was the case by being able to offer a platform that facilitates remote work management. Whenever there are "black swans", there are business opportunities. Thus, we saw the option of raising capital to be able to create the company that dominates this category, since to do so you need money, because one cannot do it with just charm and good technology ”, says the businesswoman.

Before this milestone, how was the process of raising capital?

-Going to the investment [funds] was a great challenge, because the data tells you that they invest 0.4% in women. The chances that they would give me the capital to scale up were very small. I had to build a team with different profiles, because diversity is the key to raising resources. Also, accelerators generally don't invest in women, because they think we're too nice to do big things or that we should be selling fruit-shaped soaps.

Do you think there is an opportunity for this level of investment for the region?

-It is not necessary to be in Silicon Valley to access investment rounds. What you should do is search, not to give up and get used to hearing “no".

After your experience as an entrepreneur, what balance do you make from a gender perspective?

-I hope that with this more women entrepreneurs would be encouraged and inspired. Many people talk about how important it is to invest in women, but in the end few do. I would love for every businessman or investor who says that progress must be made in gender equality, put resources or change their internal policies in order to reduce this gap.

And what would be the role of entrepreneurs in this matter?

-That they hire more women, because many times these enterprises do not have a co-founder. They start the startup as a project between friends and they miss the option of having a 360-degree vision that a diverse team can give you.

How do you see entrepreneurship in the region and in Chile?

-Chile has one of the best entrepreneurship ecosystems in the region. But Argentina also has a tradition of entrepreneurs and Colombia, along with Uruguay and Mexico, have managed to have unicorns.

What can startups do in this context of economic crisis?

-Startups are the secret weapon for governments to solve the crisis that the pandemic brings, because they are led by people who seek to solve problems in a different way. The key to success is to be aware of what the market needs, and if there is someone who can find it, it is entrepreneurs.

What are the next steps?

- New investment rounds are coming, but from next week we will give SMEs our service free of charge throughout 2020 and 2021. We are interested in them having continuity in their business and seeing improvements in their operations.