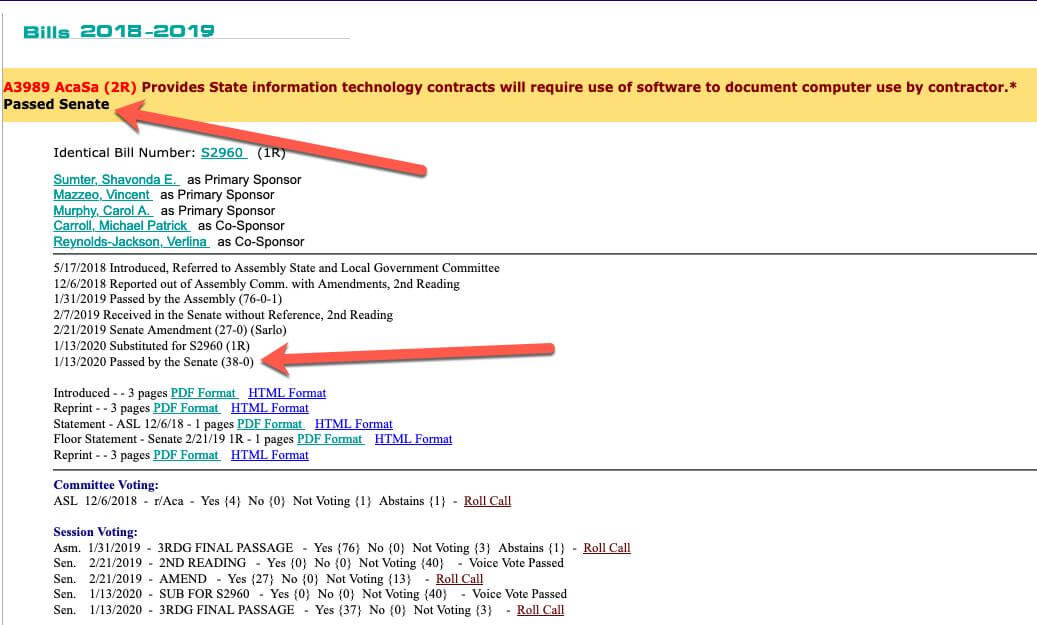 We are finally in position to share with you that New Jersey State senate unanimously votes for Our Bill.

In other words, except for one abstainer, ALL LEGISLATORS IN NEW JERSEY SUPPORTED OUR BILL, which demonstrates how uniquely unifying the cause of transparency is.

Transparent verification of billable hours provided to be one of those rare proposal on which both Democrats and Republicans could wholeheartedly agree. And for a good reason - it’s expected to save the state hundreds of millions of dollars, at zero cost and zero risk.

The process was neither fast nor easy. Government contractors were fighting against the bill, influencing state officials then the Senate was in recess for several month. But Michael Turner kept educating legislators about the benefits of transparency and overcame all the challenges. This success would not have happened with Moe Vela, a member of our Board of Directors, who met with countless state legislators and officials and spent an entire day yesterday with Michael and me in Trenton.

We don’t yet know exactly when our bills would become laws in NJ or in other states, but now we know that achieving veto-proof majority in many states are clearly a doable task. Transparent verification will undoubtedly be the new standard of public procurement and TransparentBusiness is well-positioned to capture much of the resulting demand. We believe that our market is much larger than that on which Salesforce.com has become a $145B company.

We are proud to say that we’ve achieved all progress to-date at a very modest budget, much lower than the originally projected one. Whereas many startups raise over $100M, the total amount of our outside funding is less than $6M.