We are pleased to share with you one more article related to the Unicorn milestone of TransparentBusiness.

It appeared in Mujer Executiva (Executive Woman) magazine and the Google-translation to English is posted below: 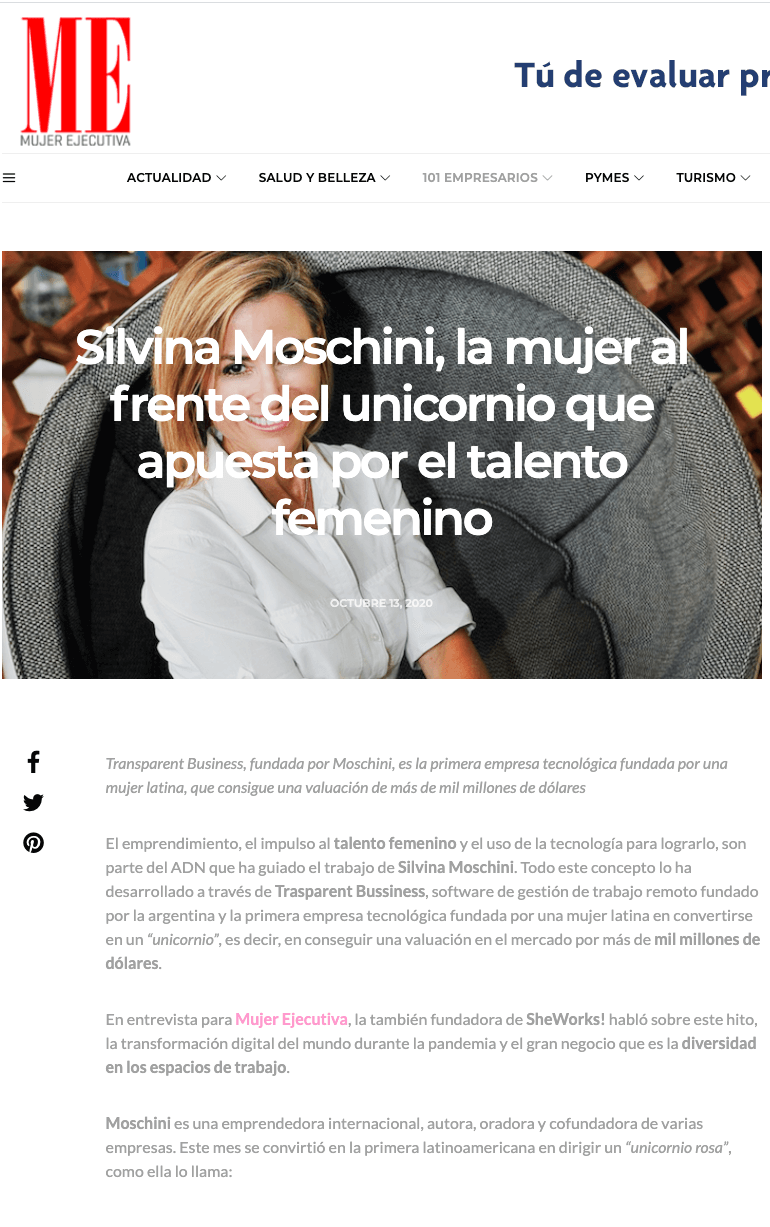 Silvina Moschini, The Woman at The Helm of the Unicorn Which Bets on Female Talent

TransparentBusiness, founded by Moschini, is the first technology company founded by a Latina woman, achieving a valuation of a billion dollars.

Entrepreneurship, the promotion of female talent and the use of technology to achieve it are part of the DNA that has guided Silvina Moschini's work. All this concept has been developed through Trasparent Bussiness, remote work management software founded by Argentina and the first technology company founded by a Latin woman to become a "unicorn", that is, to achieve a market valuation for more than a billion dollars.

In an interview for Executive Woman, the also founder of SheWorks! spoke about this milestone, the digital transformation of the world during the pandemic and the big business that is diversity in the workplace.

Moschini is an international entrepreneur, author, speaker, and co-founder of several companies. This month she became the first Latin American to direct a “pink unicorn”, as she calls it: “This is not just my recognition, it is the recognition of a milestone that we achieved with a team, I am the captain. I think it is very important to highlight this because we all build this together: the team that works with me, the partners, the investors, the communicators who accompany us to tell the story that it is possible; so that there are other women who cheer up. Because if I, who am a normal girl from a small town in the center of Argentina, I could, anyone can do it and that is my message for them, ”she says regarding this recognition.

While the crisis represented a potential impact for many businesses and the global economy, those focused on digital platforms found an area of opportunity. In the case of traditional workspaces, overnight they were forced to adopt remote work models, in the end, this was the perfect match to enhance the work that TrasparentBussiness and of course SheWorks! had already been doing.

"We believe that, within the entire catastrophe of this disease, the positive side is that today it made us accelerate from a digital point of view, as is the issue of remote work, which before we saw it as something that was very good, that brought inclusion, which gave women opportunities, which empowered them economically, but which still seemed far away ”.

And it is that everything indicates that this model is here to stay. According to the COVID-19 Consumer Study, from the IBM Institute for Business Value (IBV), in our country alone more than 50% of people want to continue working at home after the pandemic.

The reality on the part of employers is no different, according to the study "Workquake: The New Work Order" conducted by OnePoll on behalf of Citrix, almost 80% of companies will keep remote or hybrid work in the "new normal".

Women's leadership is in fashion

One of the sectors most affected by the pandemic, economically speaking, were women, according to the International Monetary Fund (IMF), the effects on the female economy were 2% higher compared to men. However, they were also the ones who best responded to the situation, at least as far as heads of state are concerned.

Moschini points out that, giving women flexibility in their work, results in an enrichment of perspective and growth for the business. The foregoing, she says, is related to some attributes that women have such as the facility to listen to and include all the actors in the organization. "That conviction and vision of integrating different people is something that women have easier, I think that leadership is now in fashion."

“Women study more, achieve more degrees and when they work in diverse teams they contribute to a better return on investment. In addition, they are better leaders in times of change - I'm not saying that they are better leaders at any time - but in times of change they are. We just have to look at the countries that best handled the pandemic: all were led by women heads of state,“ she said.

The next step or the task of women, she adds, is to educate the market to begin to accept it and to normalize female leadership.

Moschini's next bet is to attract investment that allows the company to continue growing, the objective is to "raise" 10 billion dollars through the Public Offering of Acquisition (IPO).

“Immediately, our next step is to continue raising capital. Now we are looking to raise 10 million dollars; We have already raised 20 million dollars by empowering people who have joined this process of building remote work (…) We are going to grow by buying more companies and also allying with others. Our most immediate goal for 2021 is to take the company to a takeover bid at a value of 10 billion dollars, from there to encompass the entire global talent market and grow it as a company that does things differently and collects differently.

In this sense, he pointed out that they decided to seek investment in this "different" way, since only 0.4% of the capital of traditional investment funds is intended for women.

“Doing things that improve the world is a very good business, not only for personal satisfaction (…) but for me it is extremely valuable that all companies have a social impact perspective (…) My thing is economic empowerment. I fervently believe that if you don't have the ability to earn your money, there is no worth empowerment, because only then do you have the power to make your decisions” and put them into action, she concluded.