App Seeks to Harness Overbilling by Contractors
The Times-News
Aug, 2016 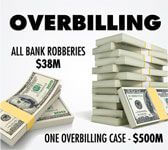 (NewsUSA) - That contractors routinely overbill governments at the expense of taxpayers may come as no surprise. That these overbillings likely total hundreds of billions of dollars should shock and infuriate us all.

Consider the recent example involving the city of New York. and its contractor called SAIC. In 2000, New York City contracted SAIC for a project called CityTime, an employee time management system budgeted at $73 million. After flagrant overbilling and kickbacks, the total project cost had ballooned to over $600 million. In 2005, an SAIC whistleblower alerted authorities about this massive overbilling. This led to a criminal fraud charge, and, in March of this year, SAIC (now called Leidos) admitted wrongdoing and agreed to a settlement of over half a billion dollars.

This profit-over-principle approach is even more disturbing when it exploits essential government services. Such was the case when Hewlett Packard overbilled New York City $163 million on an overhaul of the city's 911 emergency-communications system. At a time when the city was struggling to pay for early childhood education, youth programs and fire companies, the devastating effects of government pilfering on taxpayers was clear.

Indeed, overbilling on labor costs is common, especially when contractors charge for unverified hours. But this problem can be solved with technology that objectively tracks and documents billable hours.

TransparentBusiness, an internationally acclaimed cloud-based coordination tool, is doing just that. Designated by Citigroup as the "Top People Management Solution," TransparentBusiness monitors and tracks in real-time all the computer-based activity of any geographically distributed workforce. By capturing and storing, with CIA-grade security, regular screenshots from employee computers, government project managers can literally verify every billable minute. Such technology not only protects governments from inflated billable hours, but also increases productivity by up to 40 percent by making every billable minute accountable. Remarkably, TransparentBusiness offers much-needed protection from overbilling at no cost to governments.

We have the tools. It's time to stop writing blank checks to government contractors who inflate their billable hours. It's time to implement a transparent system of business that will save taxpayers hundreds of billions of dollars.