In response to our update from yesterday (posted below), we received several requests for the translation of the La Nacion (The Nation) article. Here it is:

THE NATION | ECONOMY | BUSINESS | WHAT HAPPENS IN BUSINESS

Business: Who is the Argentine Woman Who Founded and Leads a New Unicorn

TransparentBusiness, founded and chaired by Argentine businesswoman Silvina Moschini, became a "unicorn" by reaching a private valuation of US $1 billion

To become the Amazon of global talent, with a technological infrastructure that facilitates the hiring and management of workers distributed throughout the world and multiplies development opportunities for women, that is the goal of Silvina Moschini from Argentina, founder and leader of the remote work management firm TransparentBusiness, which became a "unicorn" by reaching a private valuation of US $1 billion and which plans to go public in the fourth quarter of 2021.

TransparentBusiness, which Moschini created in 2012, grew with the technological boom that caused the Covid-19 pandemic in recent months and this Tuesday opened an investment round that takes it to a "de facto" valuation of US $1 billion, placing it as a "unicorn", along with 488 other companies around the world.

"For us, the opportunity of the pandemic was key, which sent half the universe, 3.4 billion people, home. That made companies see that working remotely was the only possibility they had to continue with their business and accelerated the cultural transformation towards more flexible models, based on the cloud, on demand ", says Moschini to LA NACION from Miami, adding: “Overnight, working remotely went from being a vitamin to being an aspirin to solve a very urgent problem. "

[Caption: TransparentBusiness is now "on its way" for a trading debut on the New York Stock Exchange in Q4 2021]

Its SaaS platform ("software as a service", or software as a service) uses cloud technology to facilitate the management and coordination of geographically distributed work teams and joins other firms that have multiplied their market value during the pandemic, such as the Zoom video calling app.

TransparentBusiness is now heading for a stock market debut on Wall Street in the fourth quarter of 2021, a date on which it estimates it will be valued at $10 billion, according to its founder, who highlighted the importance of this milestone for a company led by a woman.

"Not only did we create a different company, which did different things; we never had an office and we also did not look for money in investment funds, which do not like investing in women entrepreneurs very much," says Moschini, explaining that statistics estimate that only 2% of the venture capital invested goes to women and only 0.4% of the funds in venture capital is destined to startups led by Latin American women.

"We wanted to democratize access to investment and created a company that raised capital by inviting ordinary people to join as partners before it went public," he continues. As the entrepreneur explains, the firm has now opened a new investment round that allows people from any part of the world to be part of the shareholders starting at US $6000.

"We can do that because there are regulations in the United States that allow it," explains Moschini, based in that country for more than two decades. For the businesswoman "the regulatory issue is a great accelerator for entrepreneurship" and she considers that in Argentina there is much to do in this regard.

"A vision is needed that favors the opportunity of innovators such as Marcos Galperin, the CEO of Despegar, Globant. I hope that there are many women and that it is not only gentlemen that we celebrate, because women are half the universe and we have to have the half the chances,“ she adds.

The Argentine businesswoman, who leads TransparentBusiness together with CEO and co-founder Alex Konanykhin, pointed out that one of the keys to the business is "social impact", which is why she donated software to the United States, China and Latin America when the pandemic broke out and developed CloudWorking Academy, a program to help entrepreneurs.

"For me as a woman entrepreneur, my vision is very important, which is to make the world of work much more equitable and inclusive, that work is something that is done and not a place where you go," says Moschini, who also created SheWorks!, a platform that connects professional women with job opportunities and which received the Equals In Tech award in 2019, with which the United Nations recognizes innovative projects focused on closing the gender gap through technology.

Although she assures that the main objective of the company was never to make money, Moschini is now betting on "giving a huge return" to its investors with the IPO. "From a business point of view, I want us to become the global gold standard in remote work management, so that transparency becomes the norm and in this way touch the lives of billions of people who through technology will be able to connect with the world of work ", says Moschini, synthesizing:" We want to be the Amazon of global talent. “ 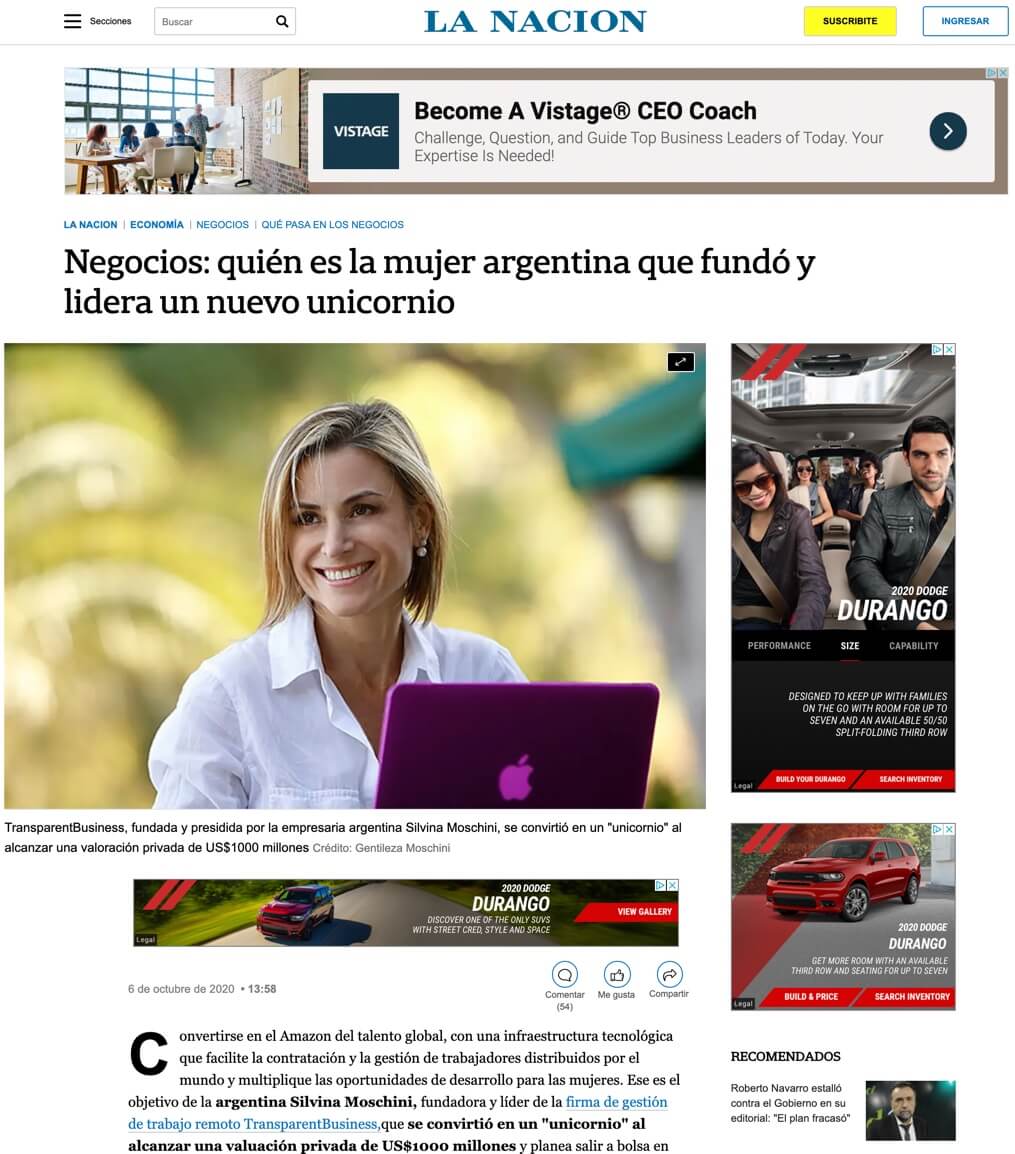